We celebrate National Hispanic Heritage Month from September 15 through October 15, marking a time to honor and recognize the contributions, achievements, and diverse cultures of the Hispanic American community.

Throughout the month, we asked MCA Denver staff to share artists/creators who have impacted their lives, as well as those that have made an influence on arts and culture in the U.S. 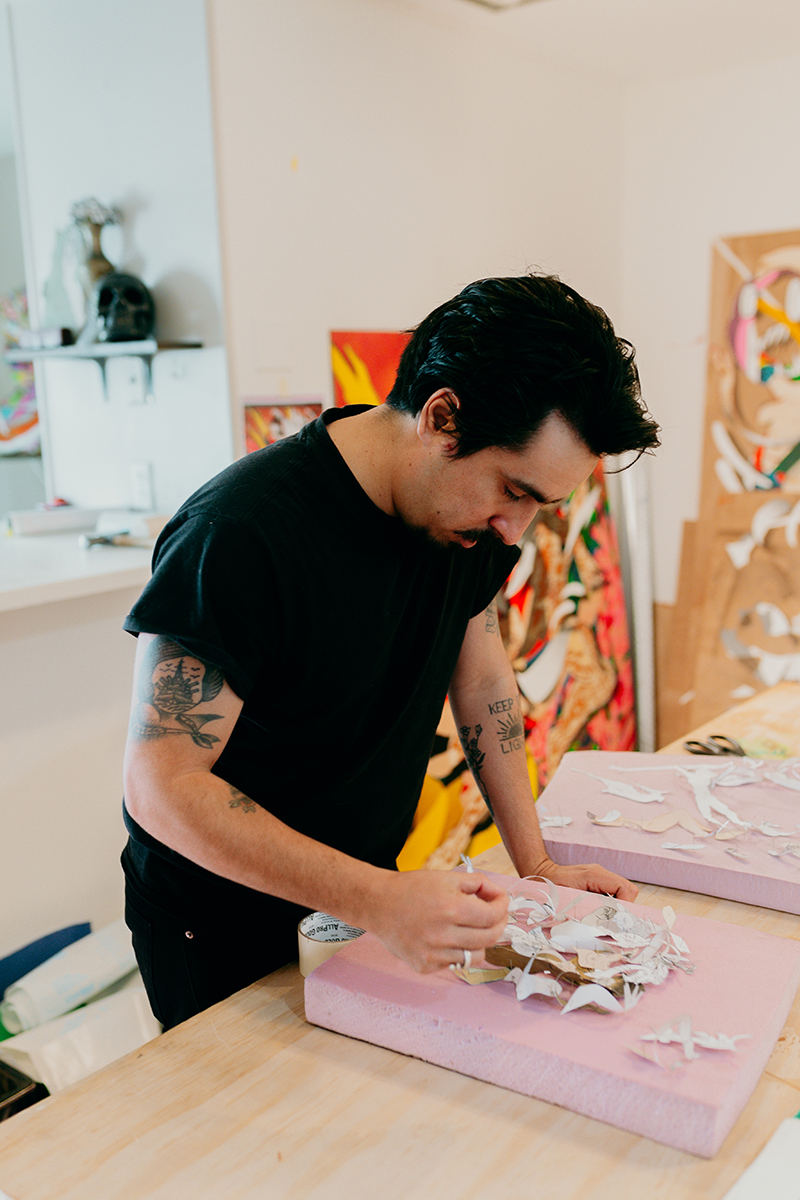 Never have I been more obsessed with an artist’s work than I am with Denver-based artist Diego Rodriguez - Warner. I was first introduced to his work with his exhibition at MCA Denver,  Honestly Lying, in 2018. It was in this exhibition where I fell in love with the complexities of his work, both in what it addressed thematically, but also the intricacies of his process and actual creation of these works.

Trained as a printmaker in school, he would take a piece of wood, carve it up, and run it through a press. Over time he got bored of that process but kept carving and stopped printing. This ultimately developed into his signature style of carved wood paintings using imagery from historical works. These works are comprised of a Picasso hand or a Yoshitoshi raft (and other famous works throughout history), layered with acrylic paint, spray paint, shadows, and carved wood, and let me just tell you, HOLY COW. They are all-consuming. They are complex. They are beautiful. They are challenging. And simply put, they’re freaking badass.

I took one Art History class in college so I can’t get all arty with you when describing his work, but I can tell you, there has never been an artist whose work and creative practice resonated so organically with me. We did an interview with him a while back and he described his collage-type remixing style as creating this new universal language, that anyone can read (whether you have the art history knowledge or not). He said, “To me, whether you’re using a line drawing from Matisse or a Japanese print or prints from the German Expressionists, there is universal readability. It becomes a language above language. There’s an accessibility to it that people can approach the artwork and understand, to a degree, what’s going on in it, you know?”

And it’s true. His work levels the playing field for the viewer, there isn’t one way to view it, or to read it, it meets you where you are and anyone can get something from it. For that, it’s both powerful and empowering. It’s something that I think about a lot in my own work, in my own creative pursuits, and it continues to inspire me to this day.

Make sure to check out this robust, absolutely enthralling interview my colleague, Rachel Grammes did with Diego a couple of years ago.

Listen to the brand new How Art Is Born Podcast we did with Diego this week!

Check out Diego’s work in the Octopus Initiative and enter to win one of his pieces in our monthly art lottery.