Included in the 2007-08 exhibition, Star Power: Museum as Body Electric

In 2007, the Museum of Contemporary Art Denver, under the leadership of former director Cydney Payton, opened its new, 27,000-square foot, environmentally sustainable facility in downtown Denver. The building was designed by acclaimed architect Sir David Adjaye OBE of Adjaye Associates (UK), his first U.S. museum commission, and was designed to minimize boundaries between the exterior spaces of the city and the interior galleries of the museum. The exhibitions welcomed an exploration of the body in art and space with Star Power: Museum as Body Electric and featured works from international and local contemporary artists. The exhibition also included three works of art that are the only permanent works of the museum: Toxic SchizoPhrenia/Hyper Version by London-based artists Tim Noble and Sue Webster, Study of Riemannian Tangencies by Colorado-based artist Clark Richert, and Kim Dickey’s Museum as Theater as Garden to accompany the rooftop garden designed by landscape architect, Karla Darkin. 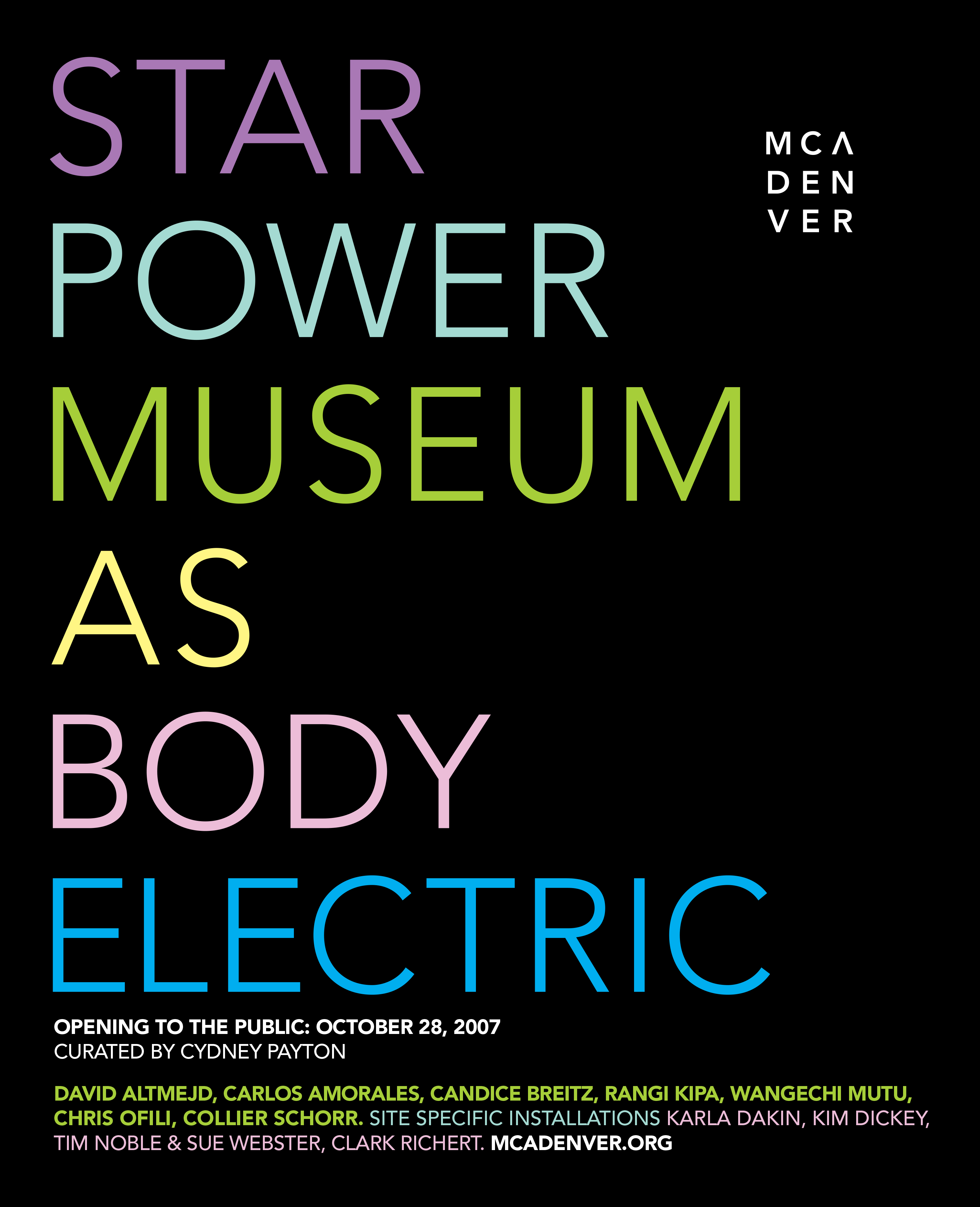 STAR POWER: Museum as Body Electric, was a direct homage to Walt Whitman’s poem “I Sing the Body Electric.” Whitman’s uniquely American poetics observe the temperate and brutal fringes of nature and mankind. Known as a voice of compassion, Whitman also possessed a truly modern sensibility of innovation and creativity. STAR POWER also reflected a Conceptual Brief, designed by former director, Cydney Payton, to bring forward the site conditions for the building as a Golden Proportion, the ideal spatial model for the convergence of architecture, humanity, and nature. The Brief illustrated the museum’s desire for an architectural program that created a balance between five principles: art, architecture, light, nature, and human experience.

The sculpture, which was the first public project Noble and Webster realized in the United States, reaches 32 feet high and is made of fiberglass and LED lights. Portraying the heart and dagger with a futuristic feel, blood drips from a jeweled dagger, which pierces the heart. The artists reclaimed the classic symbol now as a sign of empowerment with a new dimension, form, and light. Toxic Schizophrenia / Hyper Version, draws people closer through flashing lights and swirling colors, acting as a beacon for the institution. The glow of the piece is reflected in the building’s gray glass façade, incorporating the museum’s structure into the artwork's aesthetic qualities.

Clark Richert’s site-specific installation within the alley of the museum, Riemannian Tangencies, is a response to the building’s architecture through a non-repeating pattern called Penrose Tiling that is interrelated by the Golden Proportion or Golden Ratio. A technique that has long been employed by artists and architects as it is perceived to possess exceptional balance and aesthetic properties that are naturally pleasing. A green line, applied in a winding curve over the two-tone concrete pattern, randomly touches upon points in the underlying pattern and provides, in Richert’s own words at the time of the installation, "a lyrical movement reflecting the unpredictability of the creative activities for which the museum was created.”

MCA Denver commissioned Kim Dickey to create work for the MCA Denver Cafe and Bar in response to landscape architect Karla Dakin's rooftop garden. Dickey’s interior installation, Museum as Theater as Garden, is a collection of ceramic plants that bring the garden into the café. Inspired by the 360-degree horizon, Dickey’s low dense mounds hug the ground plane. The props point the viewer toward the garden creating a dialogue between exterior and interior environments to heighten the drama of the theater Dickey imagines.