MCA Denver will be offering programs, events, and conversations throughout the run of the exhibition digitally, free of charge, and available for people to experience on their own devices.

“We are proud to offer these thought-provoking programs, especially at this critical moment in our city, and across the country, as we reckon with the legacy of slavery, systemic racism, and police brutality. Our goal is to help foster thoughtful dialogue and provide connection, community, and consolation around these issues as they are raised by Nari’s profound exhibition, and have been central to his practice for decades,” said Nora Burnett Abrams, MCA Denver’s Mark G. Falcone Director.

Information about individual offerings, as well as registration for “tickets,” which will include a link to the virtual program, can be found at www.mcadenver.org.

MCA Denver is also partnering with Orange Barrel Media to bring Ward’s work to digital spaces across downtown Denver, so that the entire city can engage with the monumental themes of Ward’s work such as identity, migration, displacement and gentrification, among other critical ideas relevant to cities like Denver. The 38 digital ads are located along 14th and 16th Streets and along Speer Boulevard. Additionally, a new work titled LAZARUS Beacon will be projected on the Daniels and Fisher Tower as part of the Artists for Night Lights Denver, the Permanent Projection Mapping Installation on the tower. This project was curated by Diana Nawi on behalf of Orange Barrel Media.

Nari Ward: We the People is organized by the New Museum of Contemporary Art, New York, and is curated by Gary Carrion-Murayari, Kraus Family Curator; Massimiliano Gioni, Edlis Neeson Artistic Director; and former New Museum Associate Curator Helga Christoffersen. To learn more about the exhibition or reserve your tickets to see this exhibition, visit www.mcadenver.org. 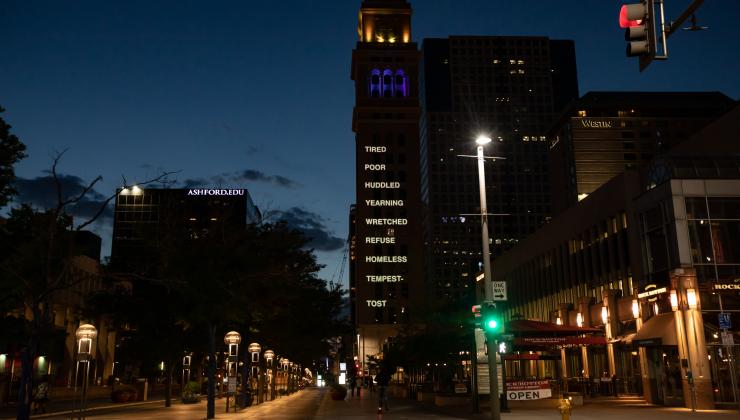