It’s been a minute! More like 525,600 (thank you, Rent). As much as I’d love to devote the MCA Denver blog to discussions of hit Broadway musicals, I’ve been tasked today with sharing a few hot viewing tips for Andrew Jensdotter: FLAK. The exhibition, which I curated, opened on February 15th and is up through May 26th. Here’s what I think you should know about it, before or after you’ve checked it out in person: 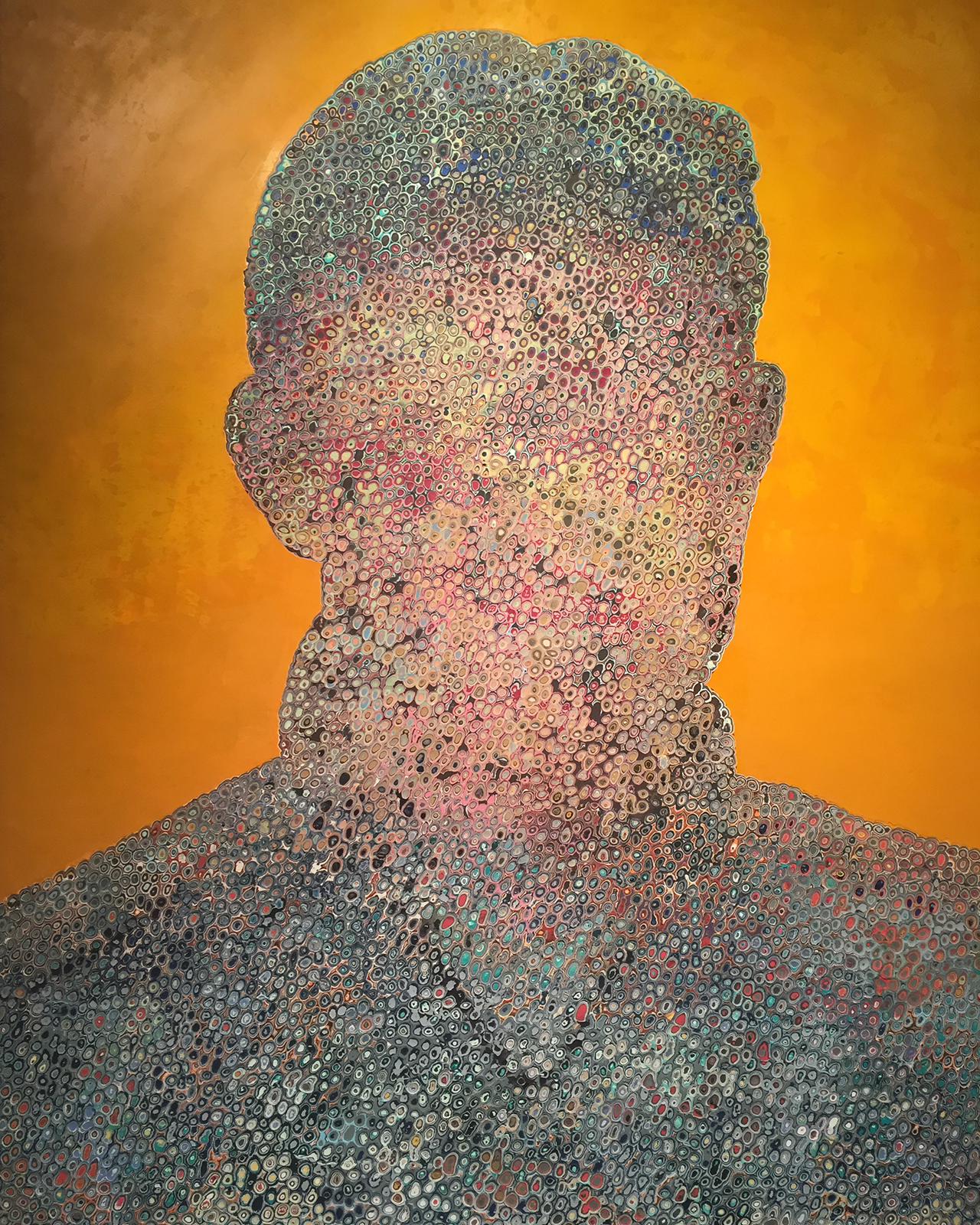 1. Jensdotter has said that he doesn’t want to be pigeonholed as a “process artist,” but one cannot fully appreciate his work without understanding his process(es). A “process artist” is just that—an artist whose methods of working are important to the overall significance of his or her work. Artists who fall into this category tend to either practice long, durational processes or singular techniques that they have honed over a long period. Jensdotter developed his trademark method of carving paintings when he was still in the MFA program at CU Boulder. To make his “carved paintings,” two of which are included in FLAK, Jensdotter uses house paint to paint the same figurative image in successive layers, building up as many as one hundred layers on one canvas. He then carves into the dense surface with a curved metal blade, creating shallow, circular depressions that reveal the myriad colors of the deeper, obscured layers.  The process by which Jensdotter creates his newer “plastic paintings” also involves meticulous accumulation. In the case of the plastic paintings, however, Jensdotter has amassed hundreds of layers of spray paint—so delicate that the artist refers to them as “butterfly wings”—transferring them from clear plastic to canvas with clear acrylic medium. 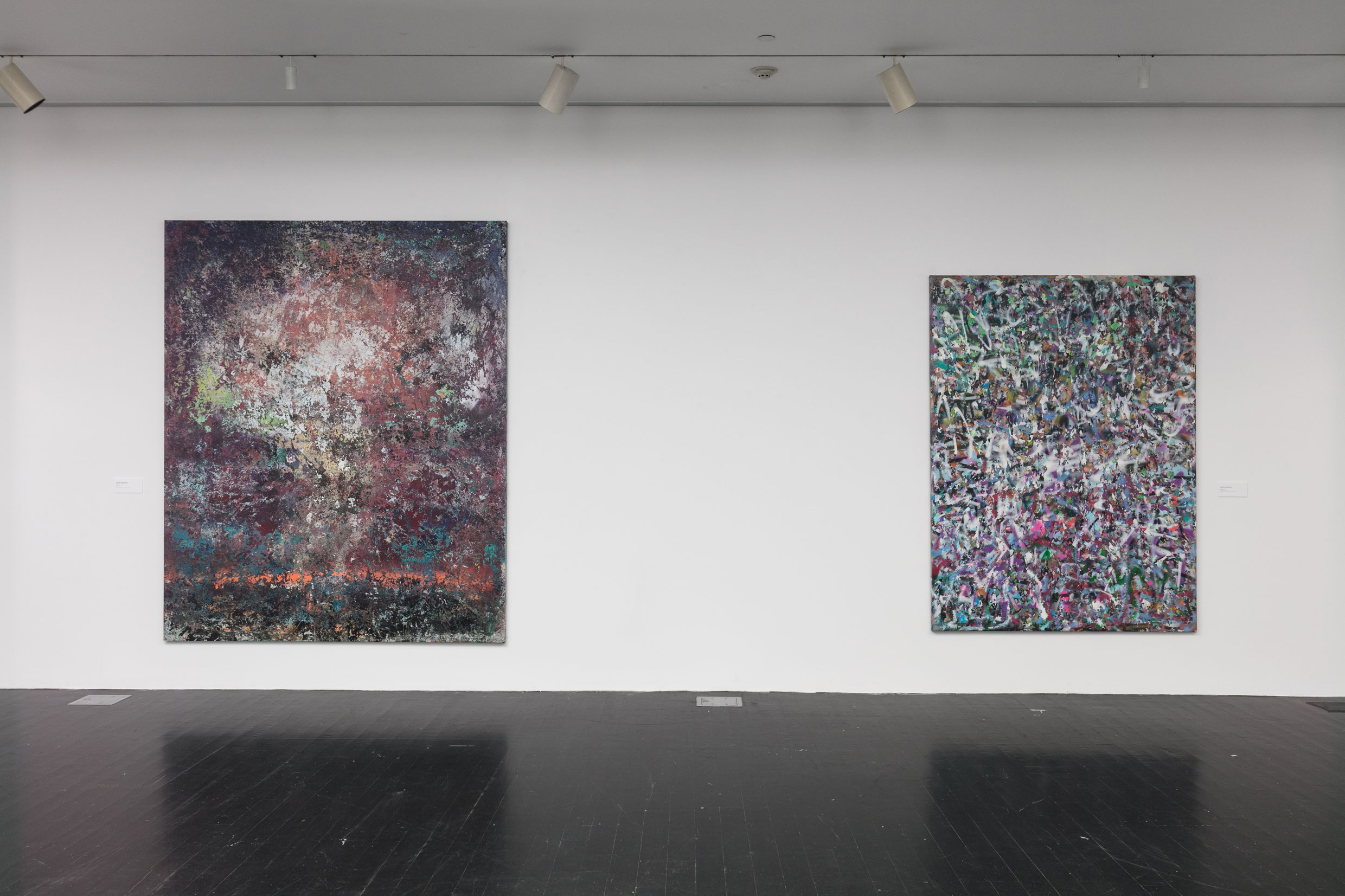 2. Jensdotter is justified in arguing that his work is more than the techniques by which he makes it. Indeed, this exhibition marks an intentional turn toward conceptualism for the artist. The entire body of work he made for the exhibition was born out of his desire to give visual form to his view of and concerns about contemporary American life. Specifically, he wanted to manifest the frenetic, fragmented digital façade the Internet and social media have created and, in turn, allow individuals to create for themselves. He gave form to this idea in the meticulously rendered pixelated surfaces of the carved works and the violent, visceral shrapnel-like shards of spray paint in the plastic paintings. The exhibition title, FLAK, refers to that violence—a barrage of anti-aircraft fire—and the word’s related, but also the more colloquial meaning, i.e., criticism or negative feedback.

3. Jensdotter’s concerns are perhaps most poignantly expressed in The Spirits I Have Called… The sculptural work, made of 124 corn brooms, refers to Johann Wolfgang von Goethe’s poem, “The Sorcerer’s Apprentice” (1779). The poem tells the story of a magician’s assistant who uses his master’s magic to set brooms to work on his behalf but then loses control of the brooms. If that story sounds familiar, it’s likely because you’ve watched Disney’s Fantasia (1940). The poem inspired the scene in the movie in which Mickey Mouse conjures brooms to clean for him. Jensdotter sees the poem as a metaphor for late capitalism, namely the abstraction of labor and its value. The decreased cultural and economic value of labor in contemporary society has particular weight with regard to Jensdotter’s practice, the foundation of which is painstaking physical labor. 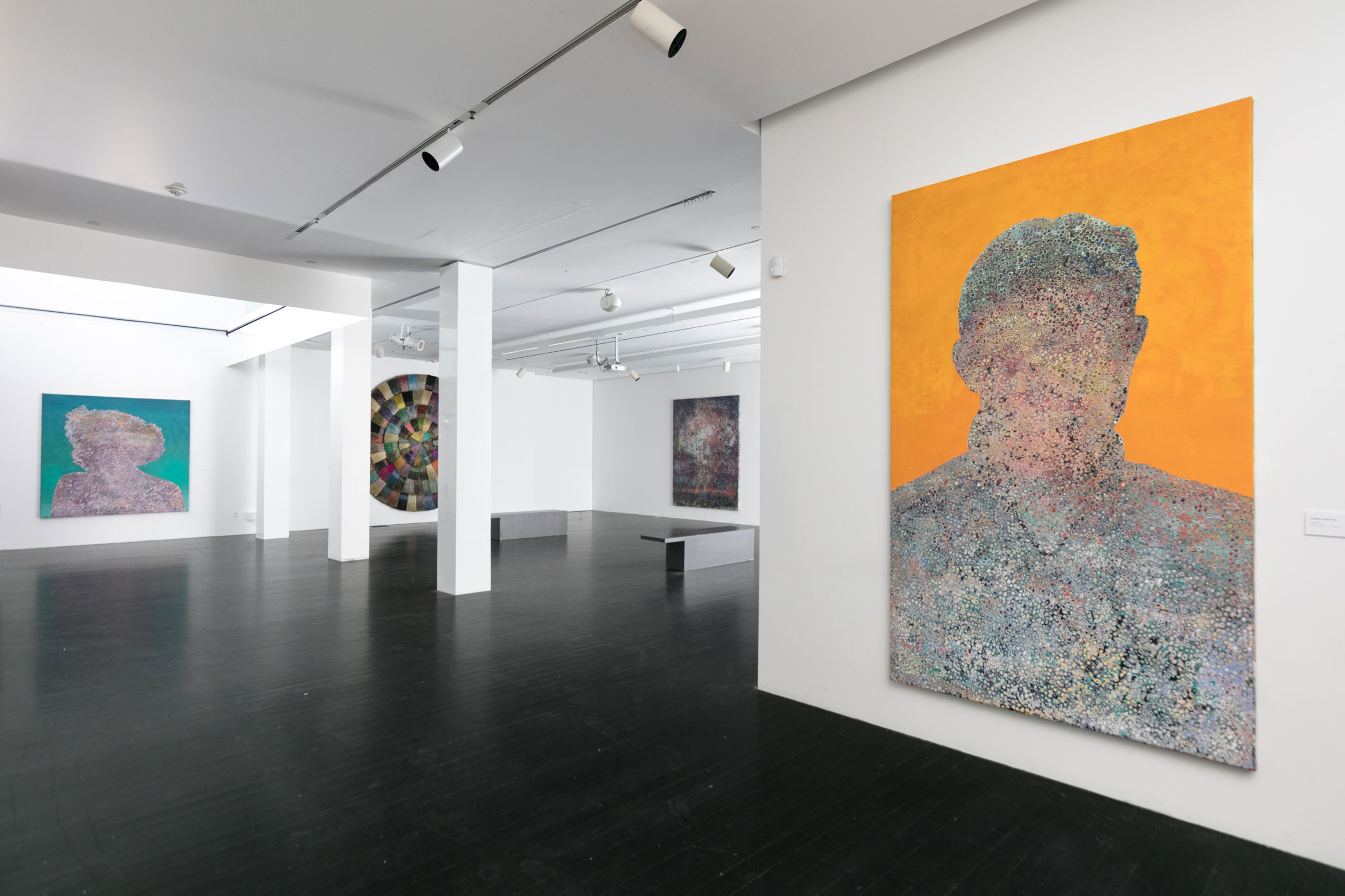 4. The figures who are silhouetted in the two carved paintings in the exhibition are the singer and actress Judy Garland and the baseball player Honus Wagner. The two icons hold particular fascination for Jensdotter because of their “all-American” image and their association, for him, with the glory days of the United States.

If you're interested in learning more about Andrew's work, join us for a conversation with him at the museum on May 8th. Keep your eyes peeled for tickets in April. And make sure to come see the exhibition Andrew Jensdotter: FLAK.