Explore Nari Ward: We the People via Audio Guide

Nari Ward: We the People has an audio guide that accompanies the exhibition. In-person visitors can learn more about most of the works on view by engaging with the cell phone prompts sprinkled throughout the exhibition. And if you aren't quite ready to visit the museum in person, you can still access the audio guide content and get a deep-dive into the work on view from the comfort of your own cell phone. You can find the prompts below so that you can listen whenever you'd like. Enjoy.

Since the early 1990s, Nari Ward has produced sculptures by accumulating staggering amounts of humble materials and repurposing them in surprising ways. His approach draws from a variety of art historical and folk traditions and especially reflects the textures of Harlem, where he has lived and worked for the past 25 years. Seeking out the personal and social narratives embedded in materials, he conceives of his sculptures as tools for articulating relationships between people. Over the past three decades, he has addressed topics such as historical memory, political and economic disenfranchisement, racism, and democracy in an effort to express both the tenuousness and the resilience of his community.

Hear Gary Carrion-Murayari, New Museum Kraus Family Curator and one of the curators of the exhibition, introduce the exhibition by calling 720-845-5413 then enter: 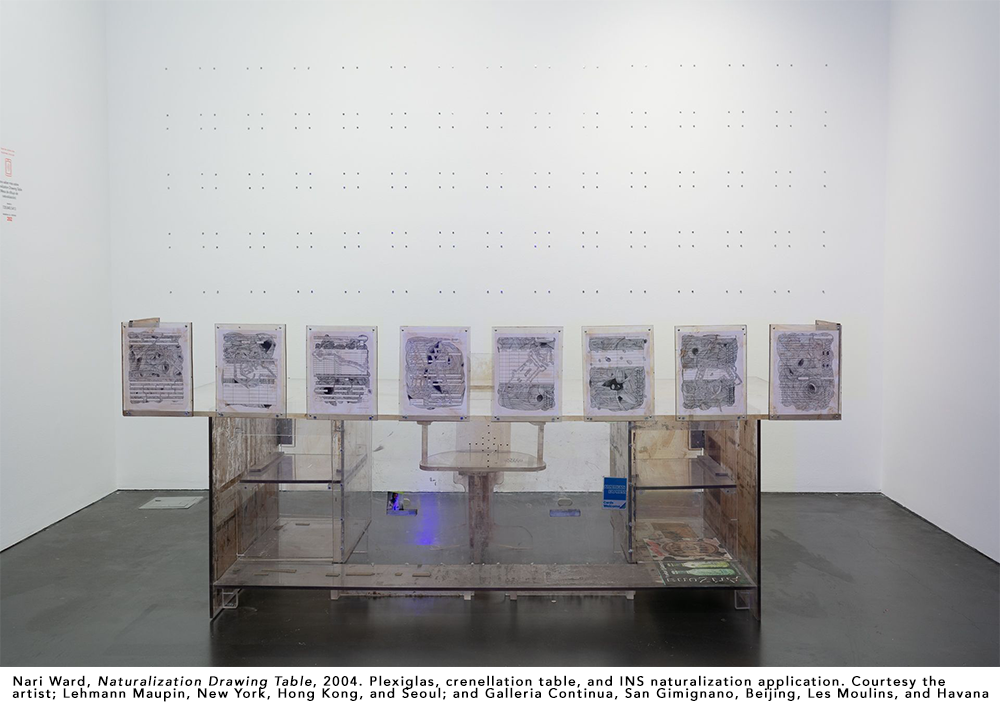 Citizenship is often taken for granted by those who have possessed it since birth. Yet for many immigrants, American citizenship is something sought after and earned through years, often decades, of navigating the bureaucratic apparatus of the United States government. Naturalization Drawing Table crystallizes Nari Ward’s ongoing concerns with forms of belonging and the infrastructures that enforce or deny it. Although he moved to the United States as a child, Ward did not become a citizen until eight years after creating this work, inspired by the intimidating process of applying for citizenship and by the country’s hostility toward immigrants.

Learn more about Naturalization Drawing Table by calling 720-845-5413 then enter: 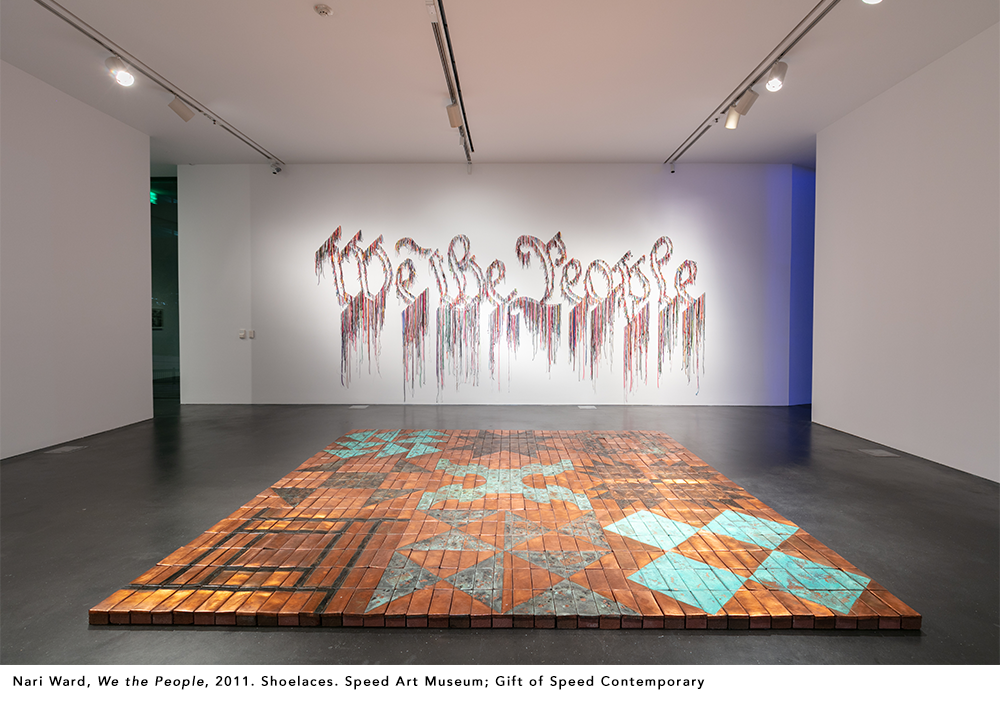 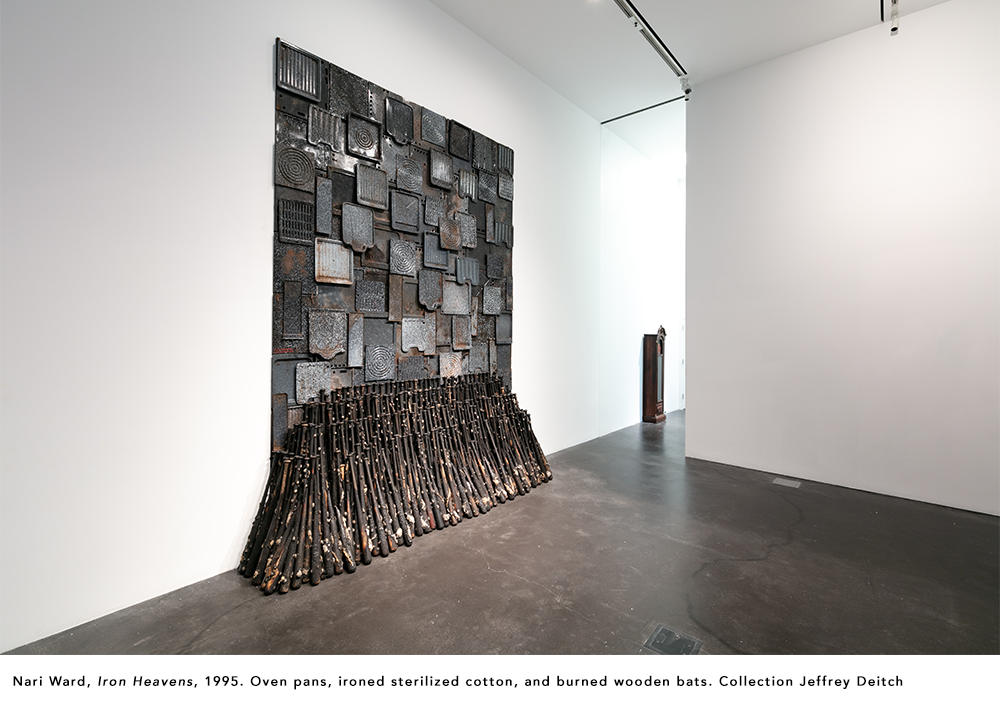 Iron Heavens, which Ward originally created for the 1995 Whitney Biennial, takes on issues of violence, transformation, and healing. It consists of a mountain of charred baseball bats gathered in front of a wall of overlapping metal cooking pans. To create the work, Ward charred each bat, then adorned them with sterilized cotton balls that had been dipped in sugar, ironed, and dried, so that the edges hardened to create small amulets. Aside from their athletic function, baseball bats evoke the threat of violence—specifically violence toward marginalized groups. The cotton and sugar, too, bear weighty associations, with their historical ties to the brutality of chattel slavery. In spite of these traumatic connotations, Ward understands the careful application of cotton amulets as a process of healing in response to the destructive act of burning that preceded it. The bats rest in front of the sprawling field of metal to create an installation that resembles both a ritual shrine and a celestial landscape. 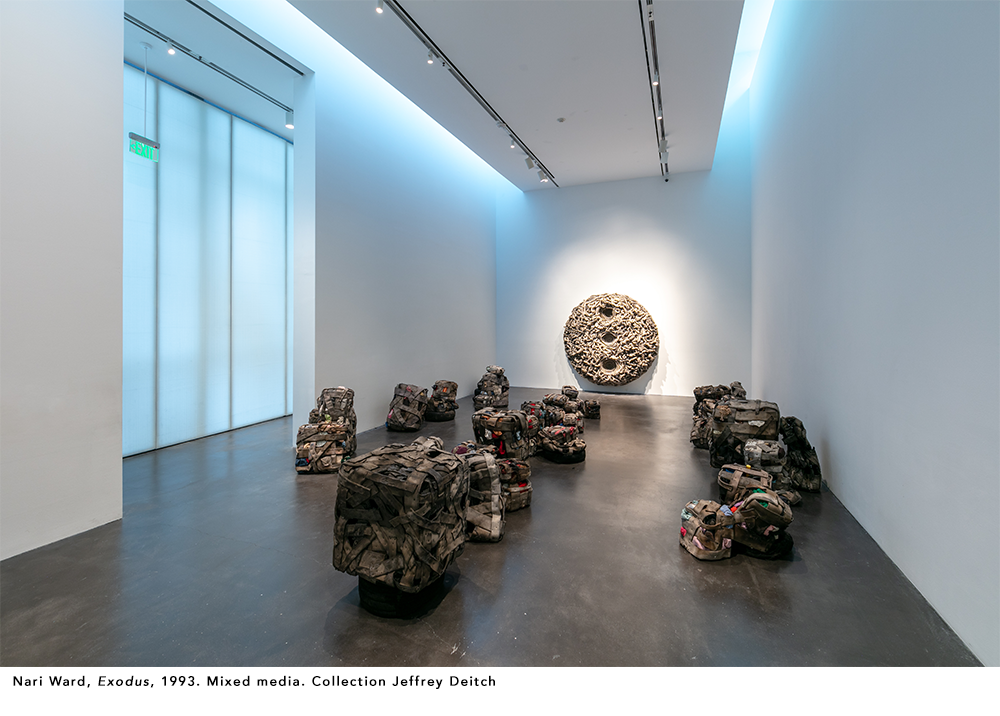 Nari Ward’s first major international exposure was at the 1993 Venice Biennale, an event that signaled a new global awareness in contemporary art. Ward presented a major installation titled Exodus, a mandala-like object surrounded by dozens of enigmatic bundles of fabric and fire hoses. With Exodus, Ward reflected on experiences of displacement in Harlem, a neighborhood defined by historical patterns of migration from the American South and enriched by subsequent waves of newcomers from the Caribbean, Latin America, and Africa. Ward has described the dislocated forms in his work as “vessels”: unmoored from the sculptural epicenter, they evoke containers for memories and histories that have been battered or dispossessed. Exodus grapples with lived experiences of exclusion, discrimination, expulsion, poverty, and neglect—realities that remain relevant amid today’s global refugee crises. The work engages a spiritual language that connects the artist’s roots to the vernacular of the global diaspora and creates emotional resonance beyond the strictures of traditional religious symbolism. 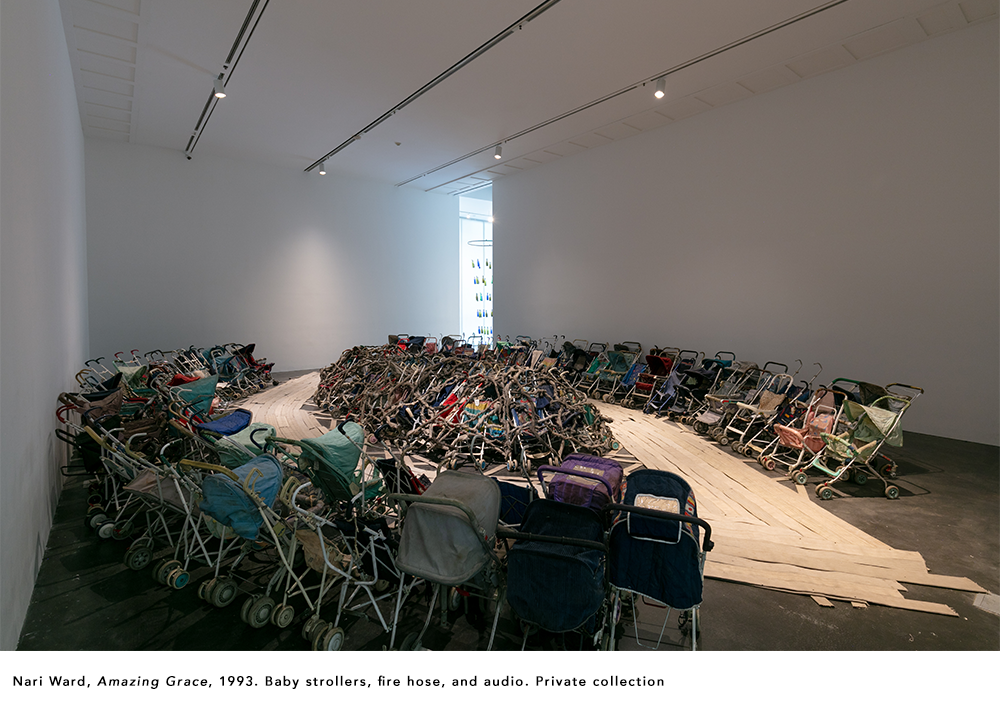 Following his residency at The Studio Museum in Harlem in 1992, Nari Ward installed Amazing Grace in an abandoned firehouse (now the artist’s studio) on West 141st Street from September to December of 1993. The work comprises approximately 280 abandoned strollers collected from the surrounding neighborhood, encompassed by a field of flattened fire hoses. As with other early works, Ward created Amazing Grace by accumulating and transforming materials that would otherwise be considered trash. A recording of singer Mahalia Jackson performing the popular gospel hymn “Amazing Grace” accompanies the installation, suffusing it with an uplifting, reverential tone. 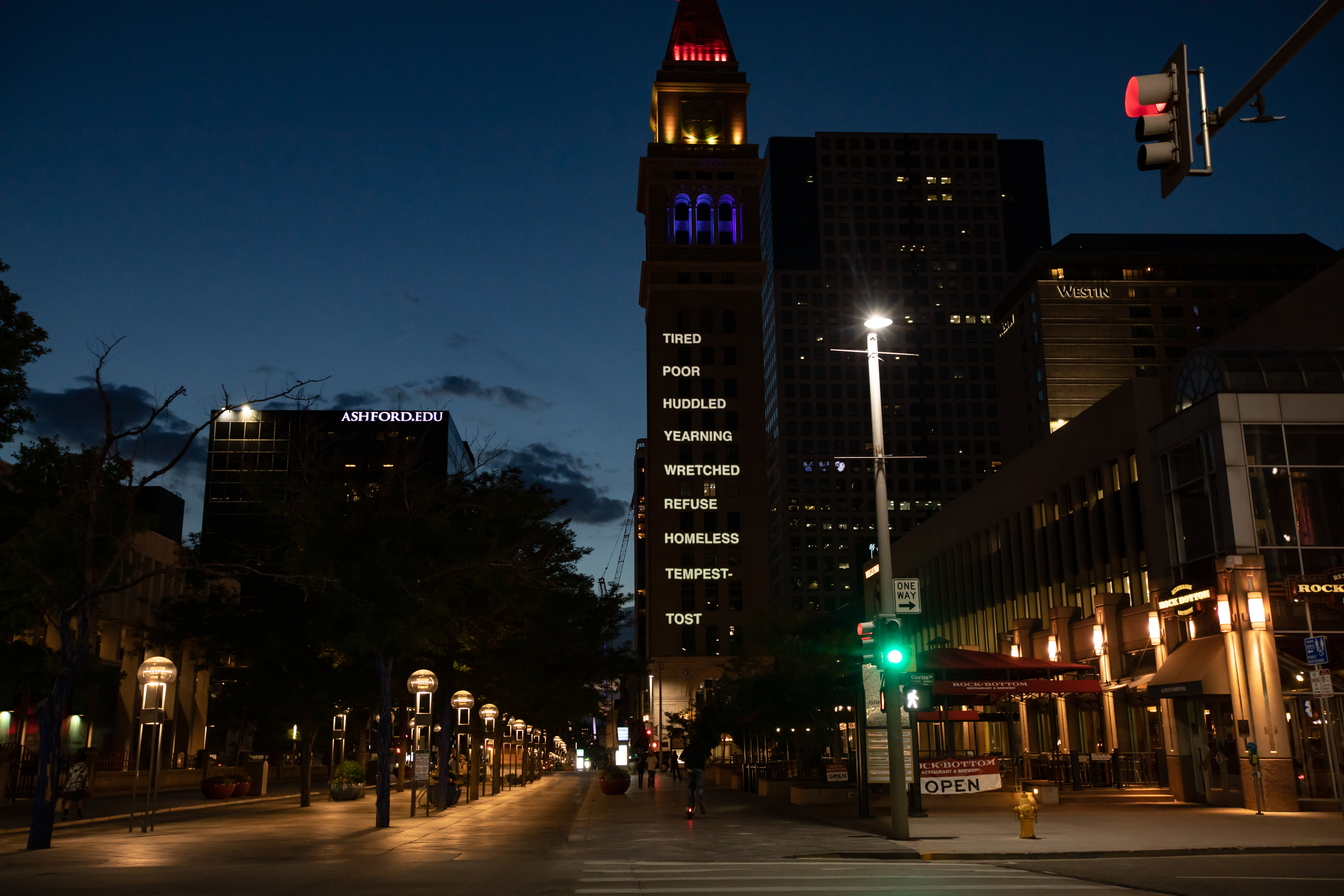 We partnered with Orange Barrel Media

Link
Check it out
Image 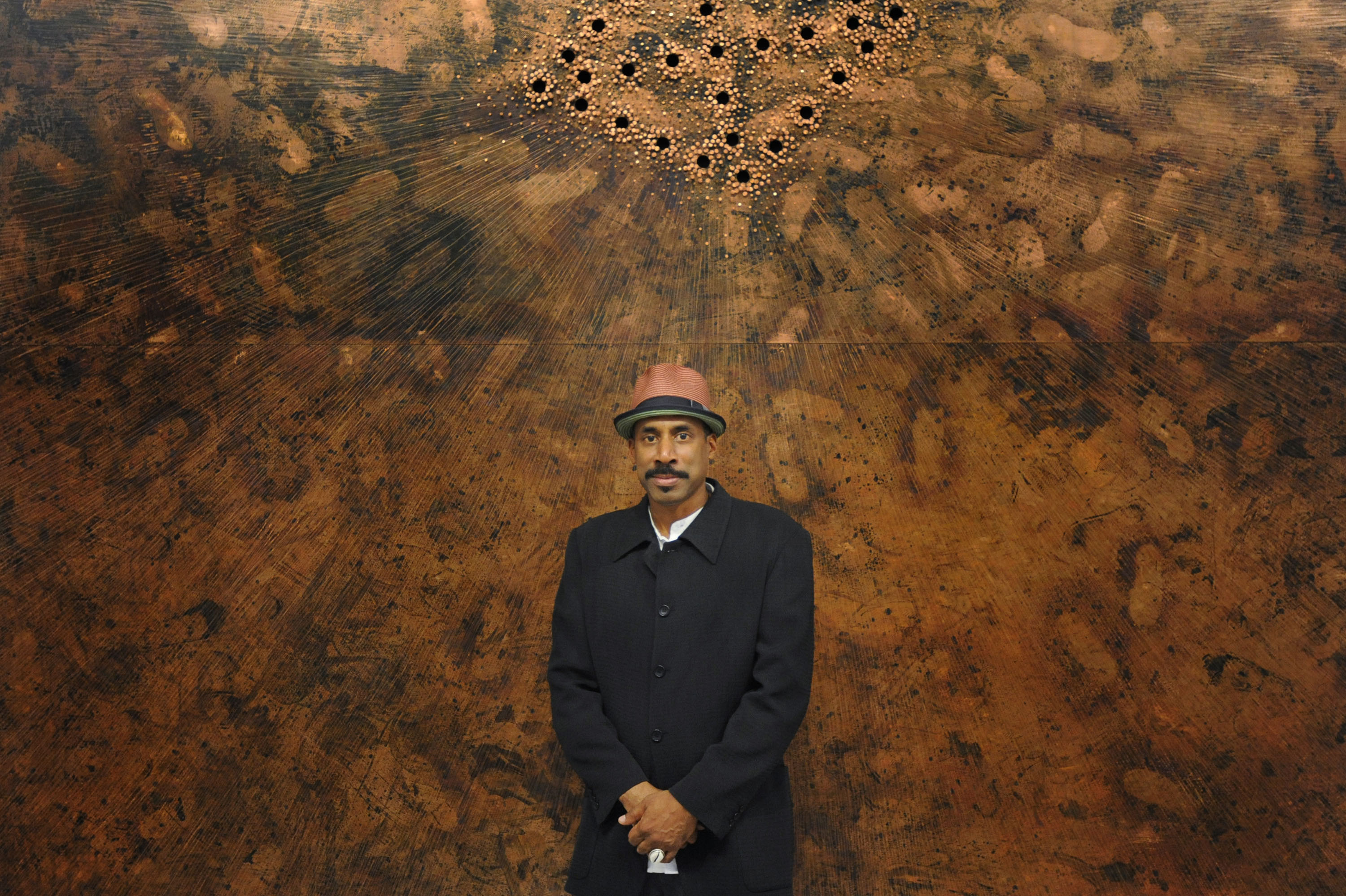 In case you missed it 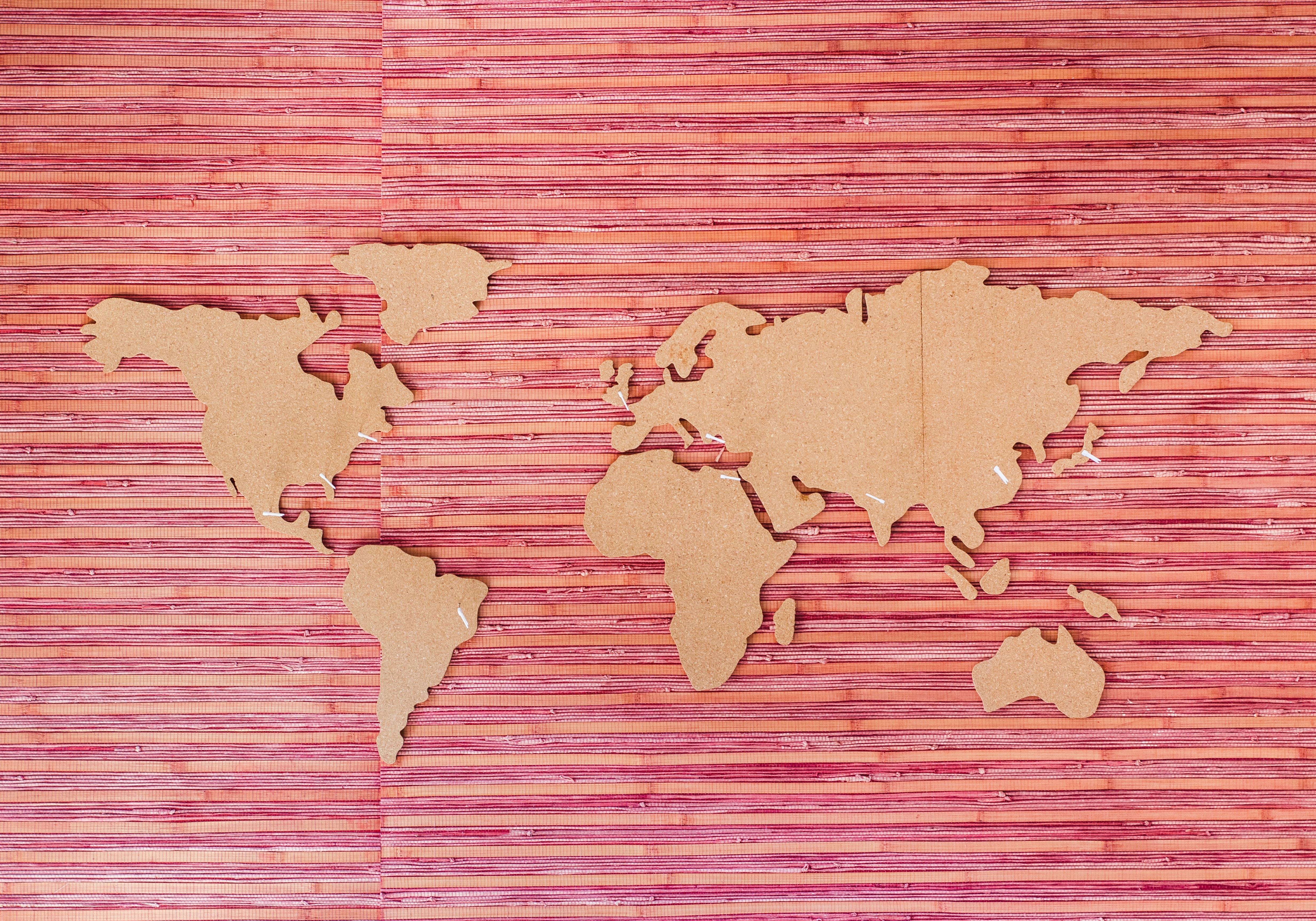 Learn More About Nari Ward: We the People

Check it Out
Black lives matter. We hear you and we see you and we stand with you. Read our full statement
Interested in winning free art for a year? Check out the Octopus Initiative