Nan Goldin in conversation with Tania Bruguera about art and activism: A Virtual Event

Nan Goldin talks with Tania Bruguera about their activism inside and outside of the studio. 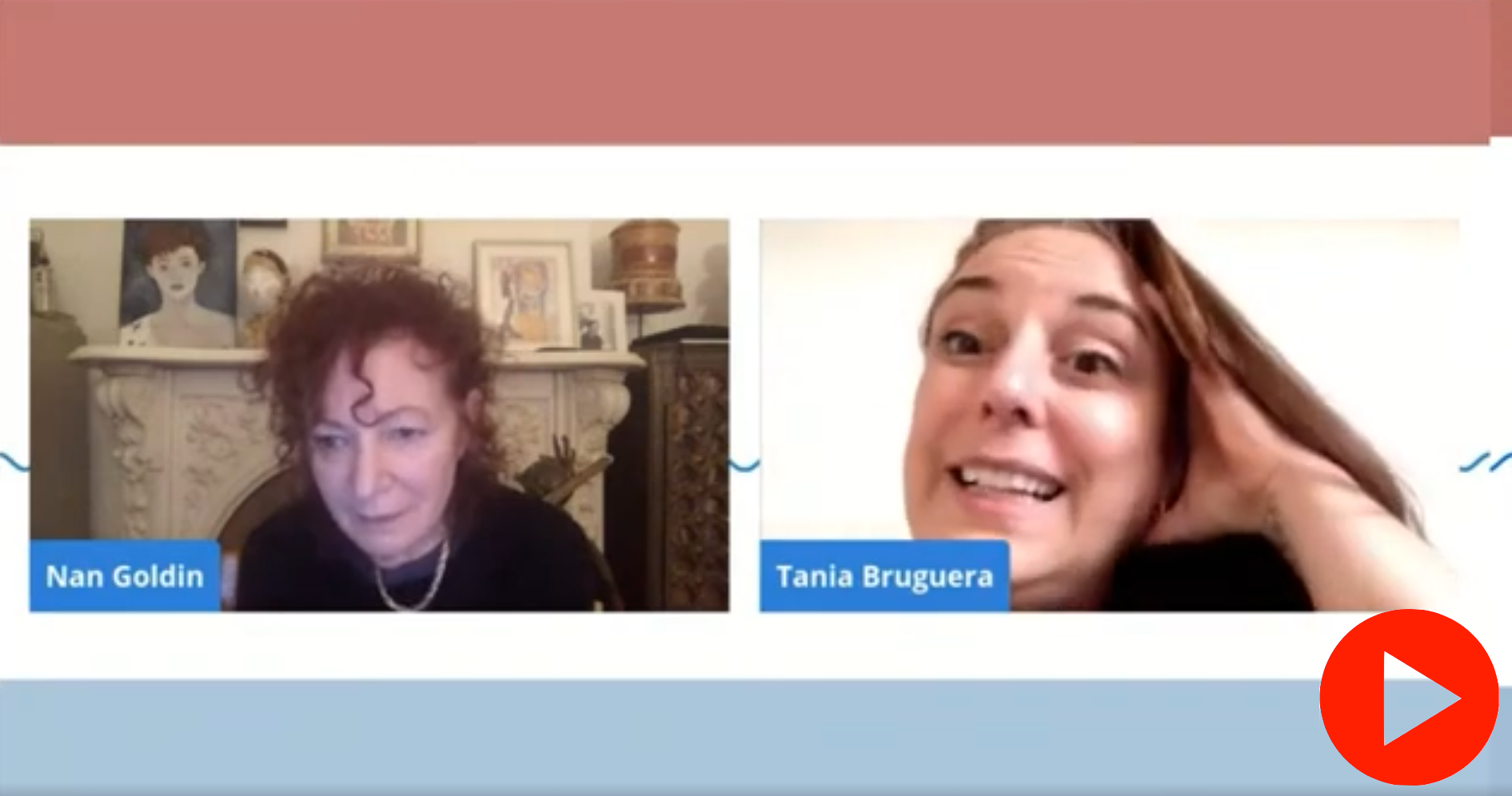 In January 2018, photographer Nan Goldin published a series of photographs and an essay in Artforum that revealed her addiction to OxyContin and her struggle to get clean. The photos and essay called for the art world to hold to account the Sackler family, who own Purdue Pharma, which makes OxyContin, and who are also well-known cultural philanthropists. In addition to disclosing her addiction, Goldin founded the activist group P.A.I.N. (Prescription Addiction Intervention Now) and has led the group in staging "die-in" protests at museums that have accepted major gifts from the Sacklers in an effort to call attention to the Sackler's role in the opioid epidemic and the museums' complicity in it by extension. Join Goldin for a conversation about the activist strategies that she's employed inside and outside of her studio.

Nan Goldin was born in Washington D.C. in 1953. She lives and works in New York City. One of the most important and influential artists of her generation, Goldin has revolutionized the art of photography through her frank and deeply personal portraiture. Over the last 45 years Goldin has created some of the most indelible images of the 20th and 21st centuries. Since the late 1970s her work has explored notions of gender and definitions of normality. By documenting her life and the lives of the friends who surround her, Goldin gives a voice and visibility to her communities. In 2017 Goldin formed the activist group P.A.I.N. (Prescription Addiction Intervention Now) which stages protests aimed at US pharmaceutical drug companies.

She has been the recipient of many awards including the Ruth Baumgarte Award, Sprengel Museum, Hannover, Germany (2019); the Centenary Medal, London (2018); the Hasselblad Award, Gothenburg, Sweden (2007); the Commandeur des Arts et des Lettres, France (2006); and the DAAD, Artists in Residence Program, Berlin (1991).

Tania Bruguera was born in 1968 in Havana, Cuba. Bruguera, a politically motivated performance artist, explores the relationship between art, activism, and social change in works that examine the social effects of political and economic power. By creating proposals and aesthetic models for others to use and adapt, she defines herself as an initiator rather than an author, and often collaborates with multiple institutions as well as many individuals so that the full realization of her artwork occurs when others adopt and perpetuate it.

She expands the definition and range of performance art, sometimes performing solo but more often staging participatory events and interactions that build on her own observations, experiences, and interpretations of the politics of repression and control. Bruguera has explored both the promise and failings of the Cuban Revolution in performances that provoke viewers to consider the political realities masked by government propaganda and mass-media interpretation. Advancing the concept of arte útil (literally, useful art; art as a benefit and a tool), she proposes solutions to sociopolitical problems through the implementation of art, and has developed long-term projects that include a community center and a political party for immigrants, and a school for behavior art.