Dread Scott in conversation with Antwaun Sargent: A Virtual Event

Watch What Went Down 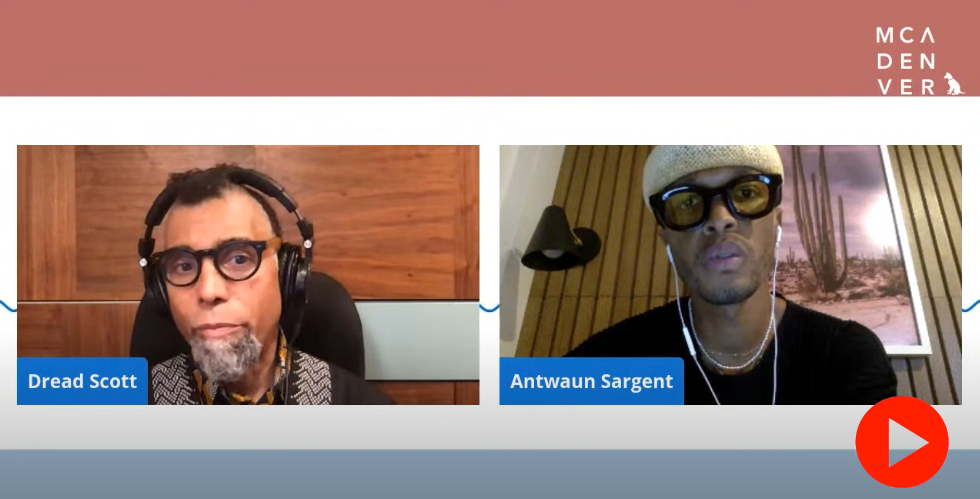 The Southern Poverty Law Center estimates that since June 17, 2015, the date on which Dylann Roof murdered nine Black people at Emanuel A.M.E. Church in Charleston, South Carolina, 127 memorials to the Confederacy have been removed, replaced, or renamed. Join us for a conversation between artist Dread Scott and art critic and writer Antwaun Sargent about the future of these and other White supremacist monuments. Scott’s work, The Legacy of Slavery Is in the Way of Progress and Will Be Until America, Which Benefits From That Legacy, Has Been Replaced With a Completely Different Society, is on view in Citizenship: A Practice of Society.

Dread Scott makes revolutionary art to propel history forward. His work is exhibited across the US and internationally. In 1989, his art became the center of national controversy over its transgressive use of the American flag, while he was a student at the School of the Art Institute of Chicago. Dread’s studio is now based in Brooklyn.

His work has been included in exhibitions at MoMA PS1, the Walker Art Center, Jack Shainman Gallery, and Gallery MOMO in Cape Town, South Africa, and is in the collection of the Whitney Museum and the Brooklyn Museum. His performances have been presented at BAM and on the streets of Harlem, NY. He is a 2019 Open Society Foundations Soros Equality Fellow and has received grants and fellowships from United States Artists and Creative Capital Foundation.

Antwaun Sargent is an art critic and a writer who has contributed to the New York Times, the New Yorker, Vice and more, as well as essays to multiple museum publications. His first book, The New Black Vanguard: Photography between Art and Fashion (Aperture) was published last fall, and Young, Gifted and Black: A New Generation of Artists, which he edited, is out in December.