In the Studio with Sierra Montoya Barela 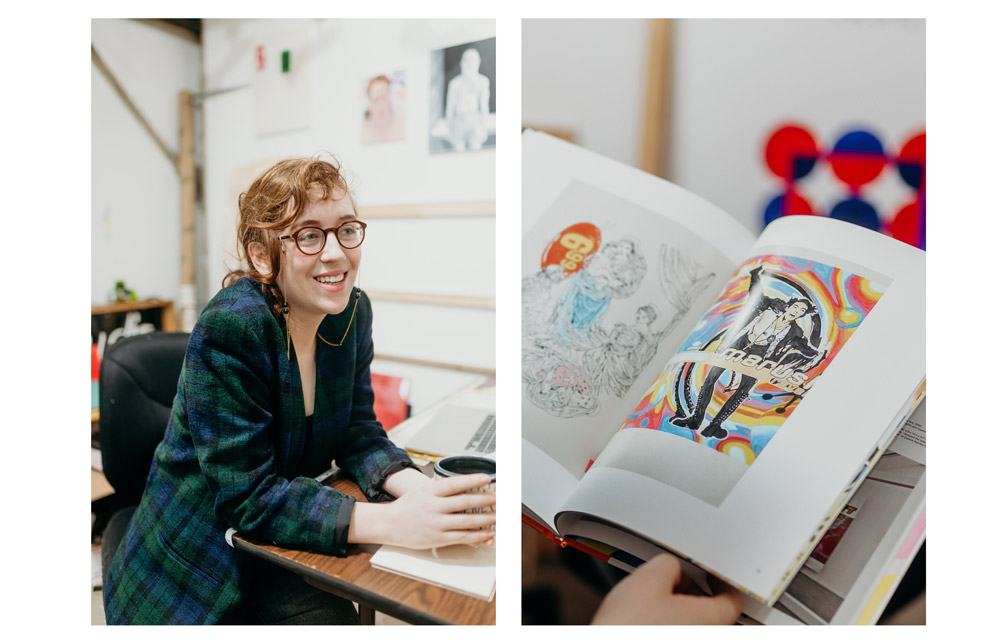 If you haven’t heard, Octopus Initiative, the art lending library here at MCA Denver, connects Denver artists to the public by placing contemporary art into the hands of many through monthly lotteries. We are committed to supporting Denver artists with commissions, and deepening the connection between Denver audiences and the art and the artists working in our city. Since the art lives in your home, we want to connect you to the artists and the spaces the work was created in. To help do that, we are kicking off an artist blog series that gives you an “in the studio” look into the Octopus Initiative artists, their work, and their lives. We begin with Sierra Montoya Barela, one of the very first artists involved in the project.

Barela, a young and seasoned artist, was kind enough to let us visit her studio in Denver. She welcomed us sporting a pine green and blue thrifted blazer and ushered us into her studio, where music played softly as she sipped a cup of coffee in a small ceramic mug.

Barela’s studio is a cornucopia of color, collected items, in-process embroidery works, books, eccentric patches, and pompoms. A bright neon sign with the words, the studio boldly printed on it is nestled in the corner and ties the entire room together. Her work fills every inch of the space. Artwork is hung, stacked on top of one another, against the walls, and laying on the floor all in a sort of dignified jumble. The large canvases and electric colors are completely immersive. Her work leaves you enamored by the dramatic forms and captivating, collage-like compositions.

We asked Barela some questions, and photographed her as she gave us an itemized tour of her studio.

How did you come to be as an artist?

So, I learned how to draw when I was a little kid from my grandpa. He always made paintings and woodworkings and I’d see them around their house and my parents’ house when I was a kid and they really made an impression on me. And then when I was in high school I heard about Rhode Island School of Design’s (RISD) pre-college program and I did it. And my parents let me do it because they didn’t want me to go to college far away. They were like, “Oh if she goes, she won’t want to go to the East Coast for college.” And then I fell in love with it and wouldn’t have wanted to go anywhere else. So that kind of solidified it for me. 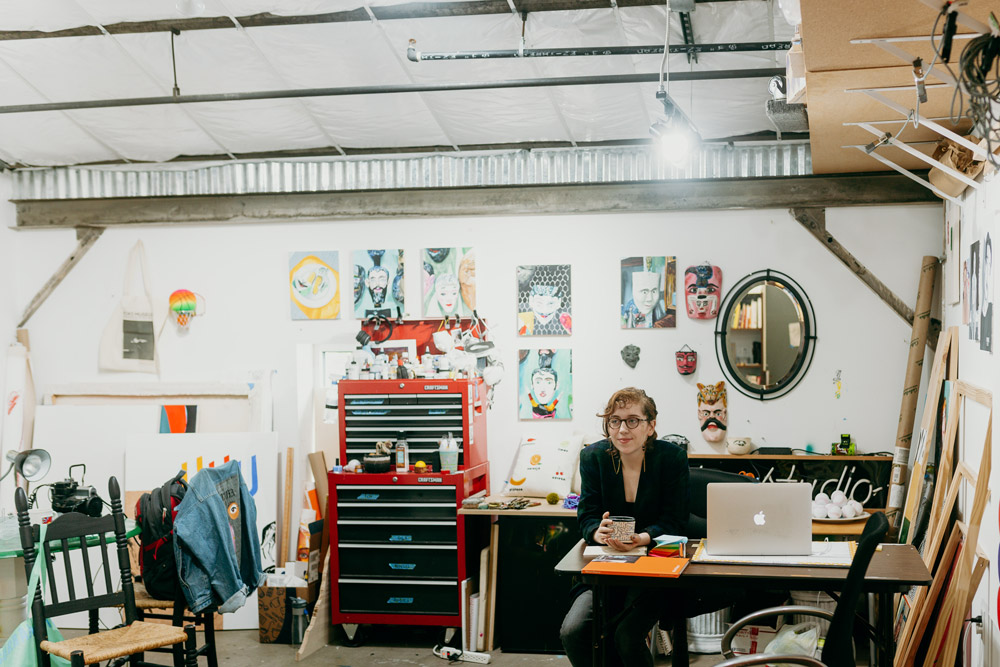 What medium did you start practicing when you got into that program?

I signed up for painting. RISD’s freshman year is very interdisciplinary, you have to take classes in all mediums before you begin your major sophomore year. You have to do 3D spatial dynamics, design, drawing. Basically, they want you to get a taste of everything before you decide your interest. Which is nice because then you’re more well rounded. 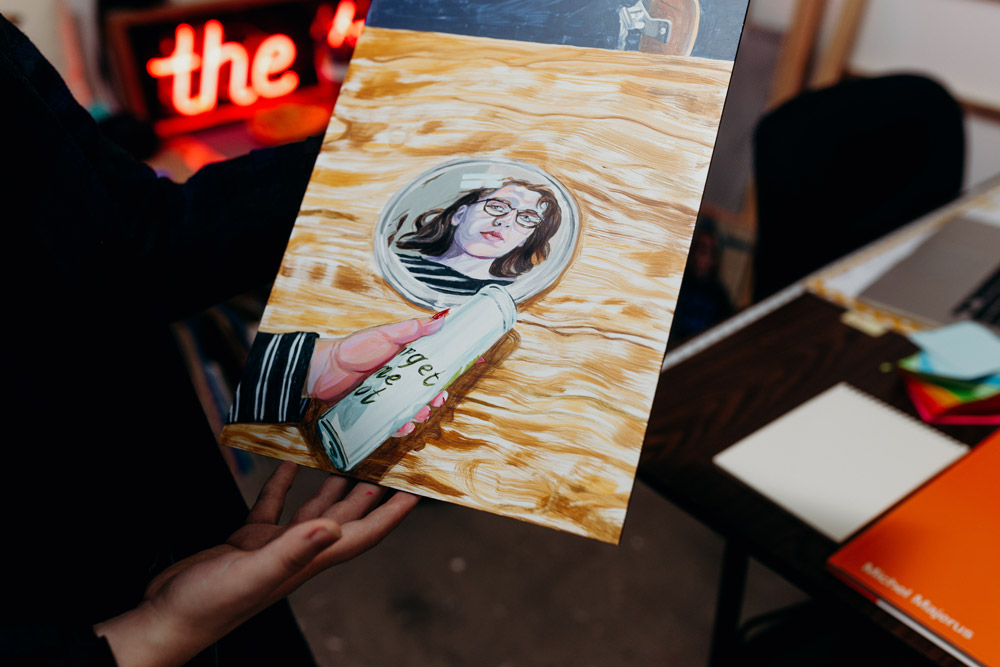 Did this experimentation help inform your style?

I don’t think it had anything to do with my style or anything, but it was cool to try other things because I was so into painting. I don’t think I would have been interested in trying other things. I made all of these really weird sculptures that I never would have made had I not been forced to (laughs).

The first time I took a sculpture class I made a form from a three-dimensional model and it was so crazy for me to realize for the first time like, foreshortening, because I was so used to seeing an arm from a different perspective. And I was working on this model and then I would swivel it and the arm was like, this short, and I was like,”Oh my god I am really flattening everything in my mind.” So, then when I got better at sculpting the physical form my painting definitely got better, because I was looking at things differently. So that was wild. 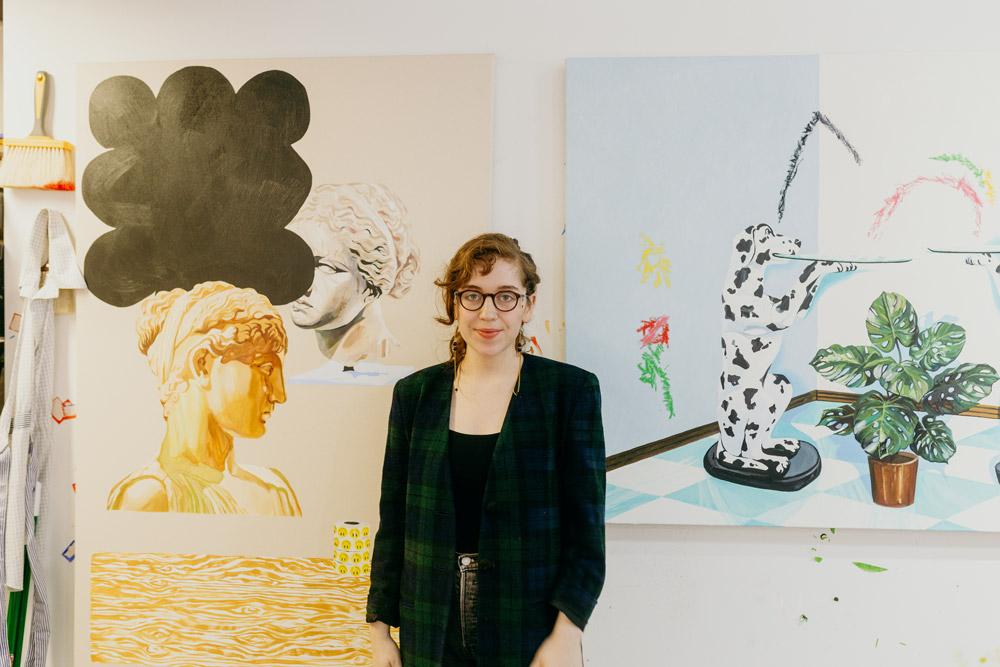 Yeah, totally. So what does your process look like?

I do a lot of planning on the computer first. Sometimes I make notes, sometimes I go into Google and I save photos, and then I’ll jot down something else…kind of a stream of consciousness process. That’s how it starts. I will drag a lot of information into a folder and then I will open that folder and look at it.Then all of these other things come to mind and I’ll start trying to create something in Photoshop or through lists. I’m a big planner, everything is planned. That’s kind of how it comes together.

When you actually start painting, what does that look like? Are there a lot of iterations of one piece or…?

When I actually start painting I usually know pretty clearly what it’s going to look like because I go through most of the iterations in Photoshop. I’ll try a lot of different color variations and stuff. I like really bright and clean colors, so for me it’s helpful if I don’t have to repaint over something.

In terms of a work actually coming to fruition, how long does that take?

I guess it depends. Usually I work on pretty large canvases. Those take a couple weeks, more or less, it depends on how many hours I work in a day. And I don’t usually go back to painting it once I finish it. Or I feel pretty certain when I finish it. 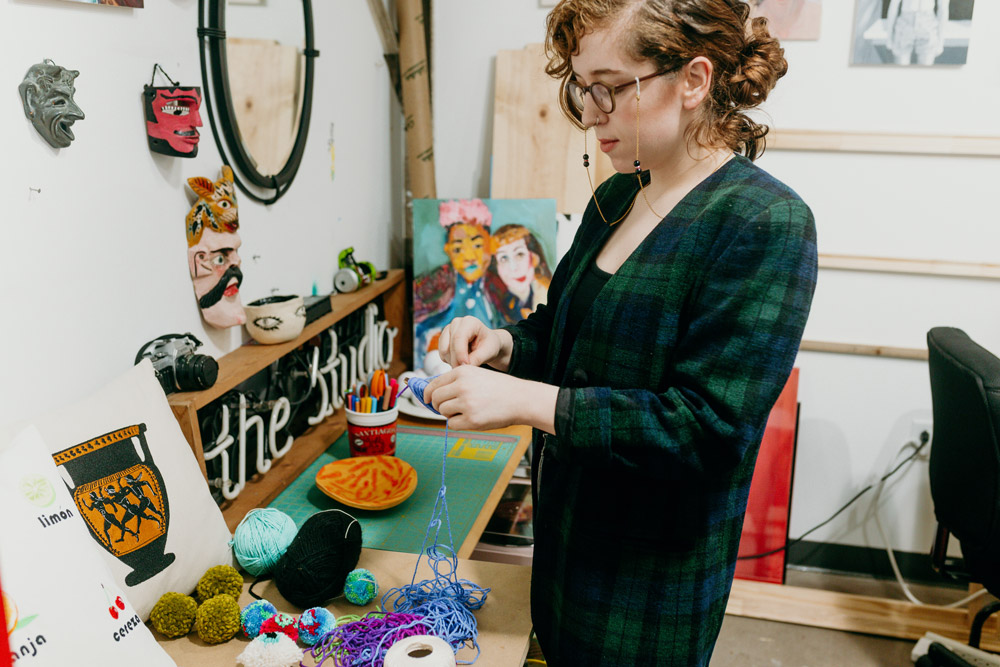 I notice there’s lots of embroidery around, is that a new practice for you?

My mom has always sewn and quilted and things like that growing up. So she taught me how to sew early on. And in the last few years I have become more interested in making clothes for myself or things that I can wear to an opening. I think it’s a fun idea. The embroidery stuff is all really new, probably in the last six months or so. And it’s a very finished looking thing that is cool to have access to. I made a skirt out of canvas material that I embroidered with little Matisse cut-outs that I wore to the Octopus Initiative opening at the MCA. And I frayed the edges, it was like a skort.

What or who inspires a lot of your work? And what really resonates with you?

I really like Michel Majerus and Lucian Freud. So, with Michael Majerus, he’s very graphic. He had a lot of things in his work that looked like he was referencing Photoshop, but he died in 2002 well before Photoshop had the capabilities it has now so he was very ahead of his time… his work was very digital and so expansive. I mean the sheer output and scale of everything he did was really amazing too.

And Lucian Freud’s technical ability. I feel like he really looked at people and things like it was the first time he had ever seen them versus painting what he thought things looked like. 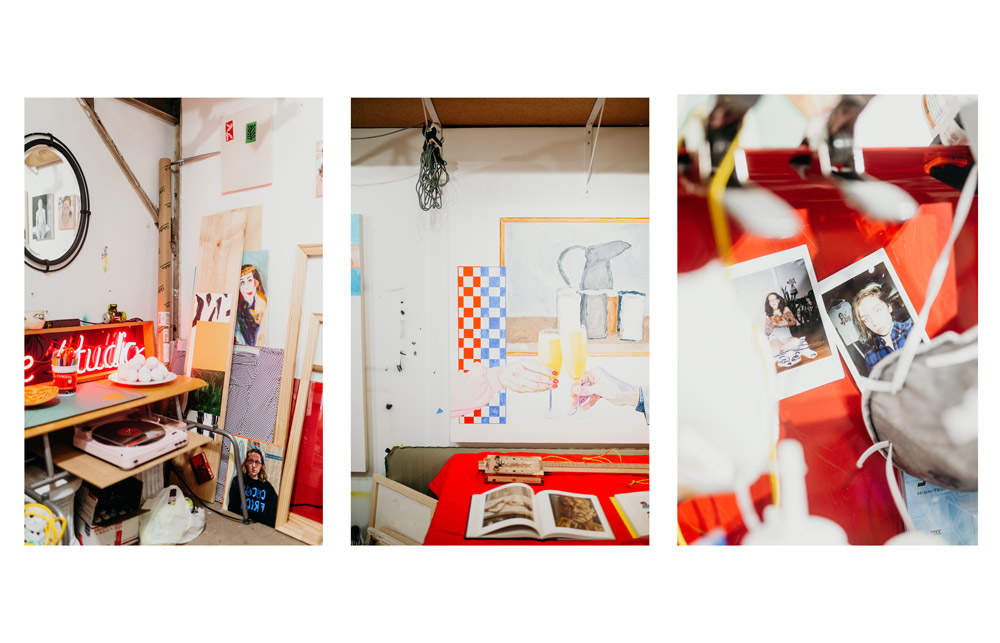 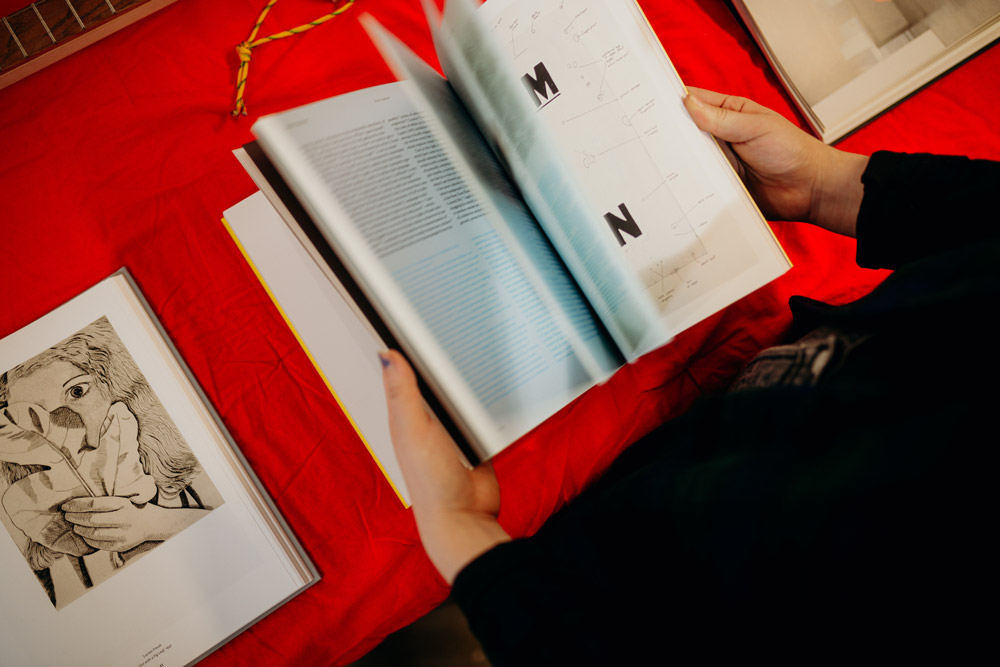 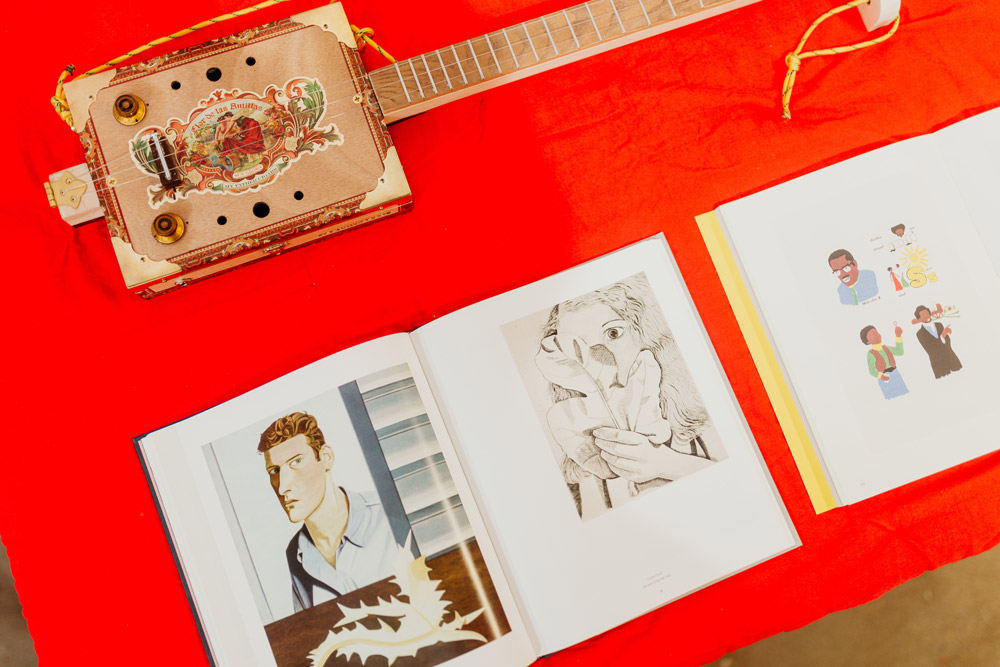 You mentioned that when you first started painting you painted perceptually, is that different now?

Yeah, so I thought it was really important to only paint things from life. I followed this invisible set of rules like you couldn’t use colors that weren’t traditional colors, like you couldn’t use hot pink or things like that. I thought you shouldn’t use things like that. And then I went to a place called PAFA (Pennsylvania Academy of the Fine Arts) in Philadelphia the summer after my sophomore year and they were very strict, very perceptual, very traditional. I thought it was exactly what I wanted. And after finishing a few courses I was like, “Wow, maybe not.” And then summer was over and I threw all my rules out the window and I started painting from photographs and using whatever colors I wanted. I started using neon colors and things. I’m really glad I took classes there, I learned so much but I also learned I don’t have to do anything a certain way. In painting you can do whatever you want.

Are you inspired by collage work? Some of your work looks very collage-like.

Totally. Yeah I think because I use Photoshop a lot there is definitely a collage element. I used to be interested in making things look like they lived in a believable space that I was creating. In the most recent paintings I started doing I was really letting the collage aspect of it be one of the first things you see when you look at it. I feel like these paintings look like they don’t have to fit into a world that we would see or experience.

So, a question geared towards the Octopus Initiative. Why do you think it is important to live with art?

I think it’s something you can feed off of and get energy from. Personally, I have a small collection of works that I have traded for or bought from friends or other artists that I really like and I have never gotten a piece from somebody and regretted spending the money for it. Versus that happening all the time with clothing and other things. I look at the pieces I have every single day at my house. I have a few small screen prints and an ink drawing by Heather Benjamin. I have a painting-slash-drawing by Ian Thomas Miller. One of the larger things I have is a kind of painted wall sculpture by Rob Polidoro. It feels different to be around art that isn’t yours. They always make me happy. 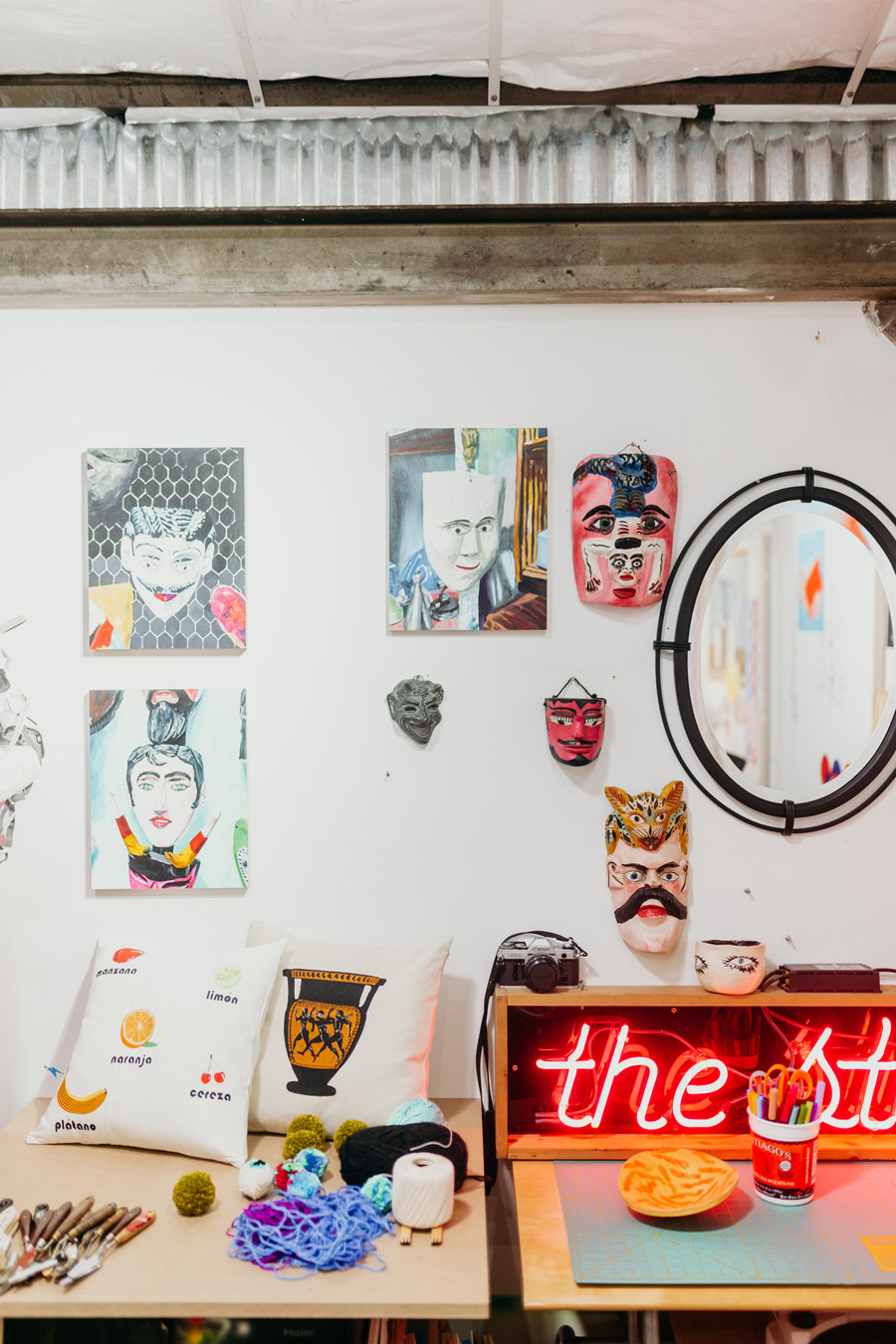 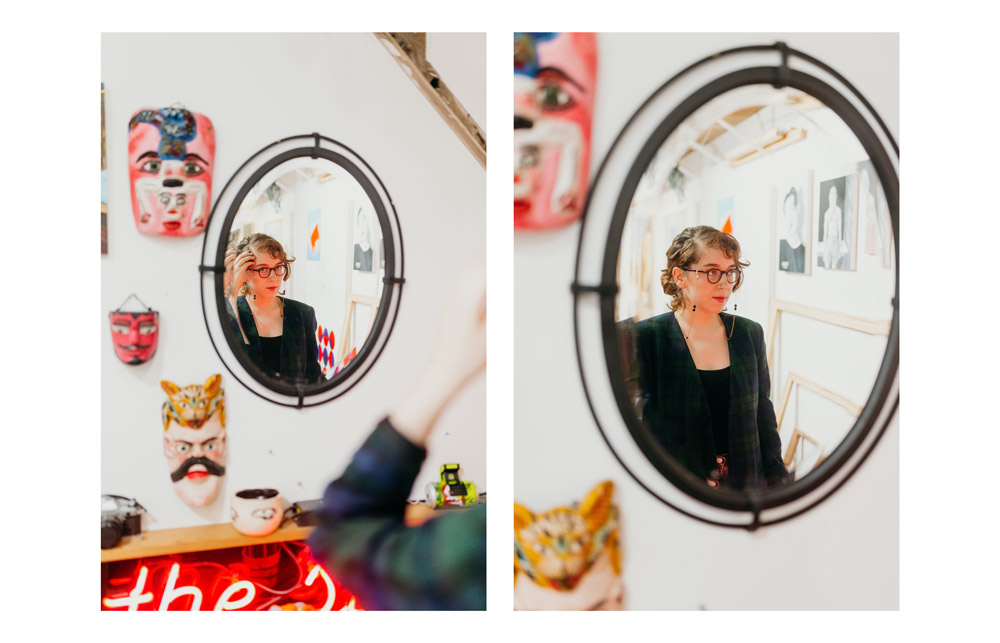 What do you hope that people get from your art?

I think that they can look at it and take from it whatever experience they can relate to. They don’t need to get my exact perspective or what I was trying to have them feel. I want them to look at it and make their own story or have their own reaction. And whatever reaction they have is fine. I don’t make a piece and think that people need to have a specific feeling when they view it.

How do you feel about being involved in the Octopus Initiative and having strangers live with your work?

I think it is so cool. I wish I could see more of the pieces that go out to people’s homes. I wish more people were sharing images of it; I would love to see my work in their homes. Obviously it’s such a cool project and I’m really happy to be a part of it. 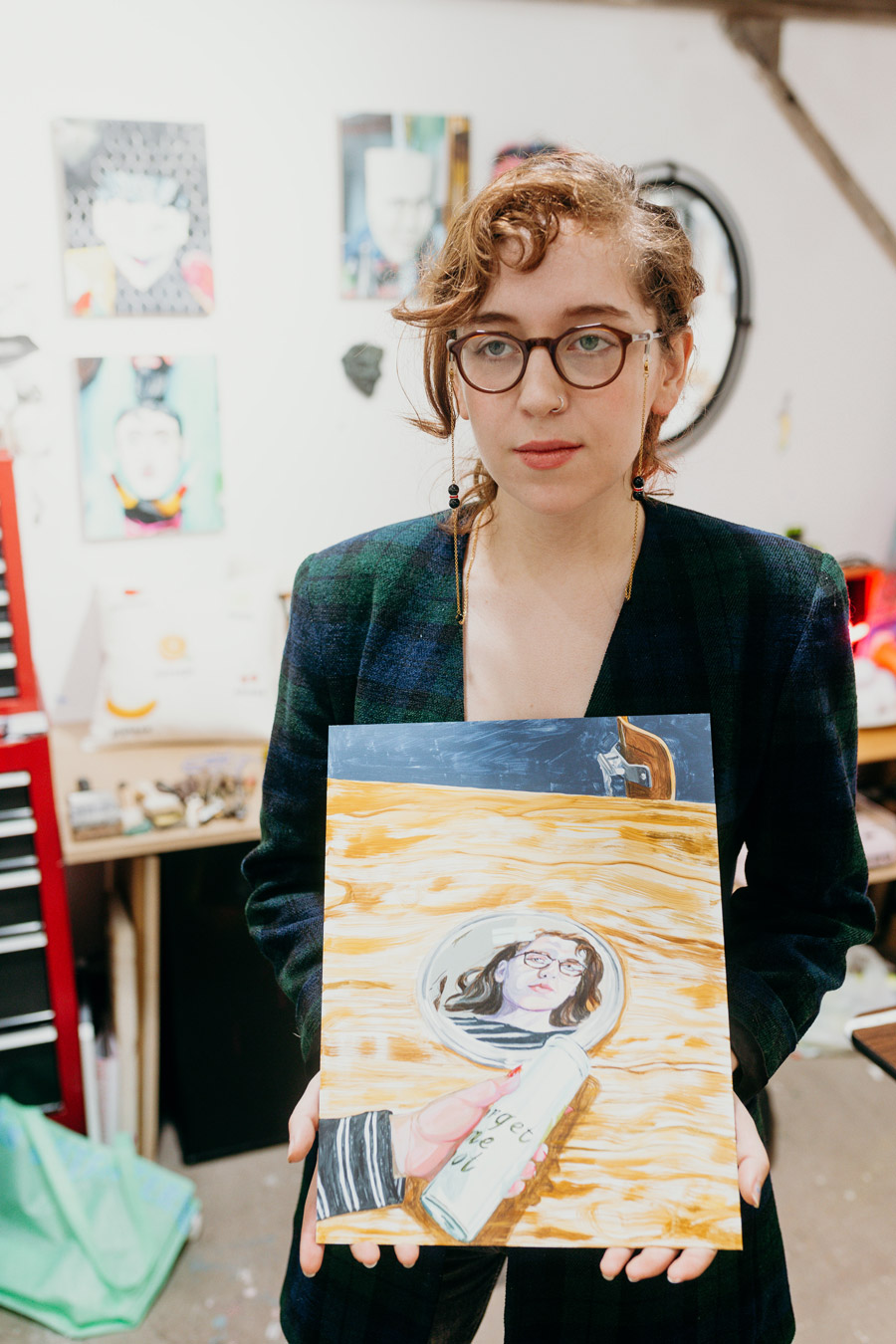 So what is next for you?

Two friends from RISD, Paige Mehrer and Adriana Gallo, are launching a thing called Zampa Club soon and I’ve been working on making a few things for that. I’ve made a few embroidered pillows. Maybe I’ll have some of my machine embroidered patches.

Also I am designing one of the three stages for Grandoozy. Kendrick Lamar is headlining. And then I’m not really sure after that; I’ll just make a lot of paintings.

So you’ll be sharing a stage with Kendrick?

Check out more of Sierra’s work here and enter to win her art in the Octopus Initiative lottery!