Now That's What We Call Elevator Music with Nathan Hall

Nathan Hall is a composer and artist—one might say even say he's a sonic artist. If you're asking yourself, "What the heck is a sonic artist?" well, we weren't exactly sure either, so we turned to our friend Thad Mighell. Thad is a guy who knows things like this, and as he reports, "A sound or sonic artist is someone who works in both visual art as well as experimental music, however, neither category fully describes their medium. I describe it as a sculptor who works with sound instead of clay, and strives to push the viewer to have a more visceral reaction to the work in the physical space rather than through abstract thought as a more traditional artwork is digested. Sound art is time-based and performance-based, which are both temporary constructs. To me, that's one of the things that makes the experience special."

Nathan uses music as an artistic medium to explore a variety of fields including science, nature, the fine arts, history, and sexuality. Many of Nathan’s works are based on his travels, mapping out a geography of his experiences while taking the listener on their own personal journey. Hall’s site-specific performances are often inspired by the performers and locations for which they are commissioned, and have a diary-like quality where that particular piece of music could have only been made in that place, at that time.

For example, he recently traveled to Buffalo, New York, to perform a musical walking tour inside Silo City, a historic set of grain elevators saved from demolition and currently being preserved for events and performances. Nathan composed a set of musical instructions for performers to play directly on the silo chutes. The piece evoked the sounds and patterns of the workers in the grain silos' heyday. At one point all the performers play horns, like an emergency signal, and the piece ends with players shuffling off home. 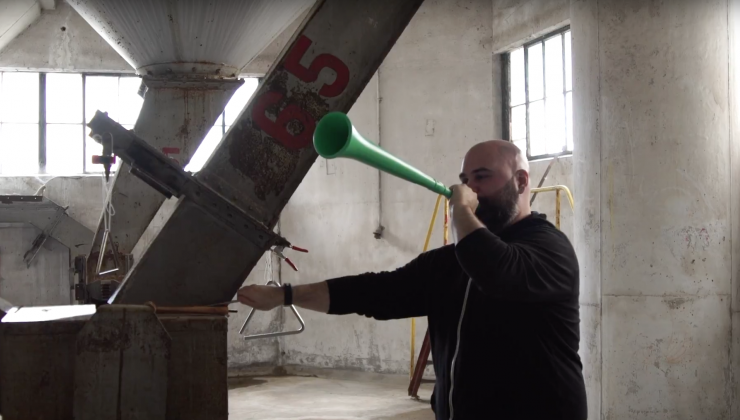 Nathan will be re-envisioning one of these Silo City pieces for Thursday's Three Things, using the audience as performers—no musical experience necessary!