I know sometimes going to a museum and seeing a lot of art at once can be overwhelming, so I thought I’d ease you into our new exhibitions with some things I learned in helping to prepare them. Oh by the way, I'm Zoe Larkins, the Assistant Curator here at MCA Denver. So as not to overwhelm you with profound insights (wink wink), I'm going break things down one show at a time. To start, here’s what I think you need to know about Diego Rodriguez-Warner: Honestly Lying, which I curated:

1 When he first started making art, Diego Rodriguez-Warner thought he wanted to be a printmaker. In fact, he enrolled in the Rhode Island School of Design’s prestigious graduate school to focus on printmaking. Within his first year there, however, he became bored with the process of making prints from the woodblocks or linoleum pieces into which he carved compositions. So, he kept carving but stopped printing. That’s how he created his first “painting,” the all-black work on plywood that’s included in the salon-style installation on one wall of our Atrium gallery. The image is a composite of a drawing by George Grosz and a still from “Johnny Mad Dog,” a movie about child soldiers in Liberia. 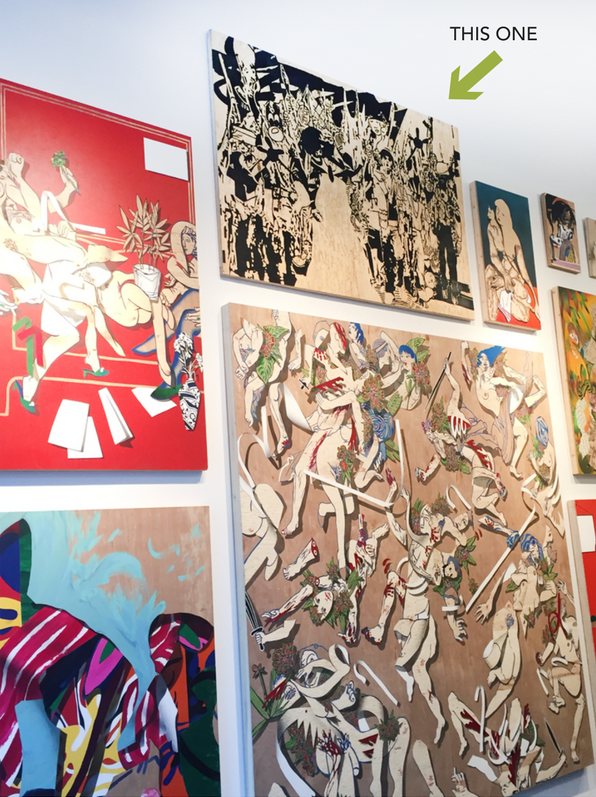 2 Another key to understanding Rodriguez-Warner’s complex paintings is his use of imagery from historical artworks. When he was in graduate school, he began appropriating (a fancy word for copying) imagery from works by his favorite artists. He did so because he didn’t believe he could improve upon the work of great artists and thought it was silly to try to do so. Why try to paint another nude woman when several really nice ones already exist? You can see some of the appropriated elements, which he calls “gestures,” that he incorporates into his work in our exhibition in a case that's in the Merage Gallery. You can also try to spot them in the paintings throughout the show. Though you might be here all day…

3 Rodriguez-Warner selects the imagery he appropriates for no other reason than because he likes it. Among his favorite artists to copy are Tsukioka Yoshitoshi, Egon Schiele, and Henri Matisse. Interestingly, many of the works he appropriates were made during violent periods of history, such as the Meiji Restoration in Japan and World War I. Another thing that many of these works have in common is a style that combines expressionistic figures and strong lines. 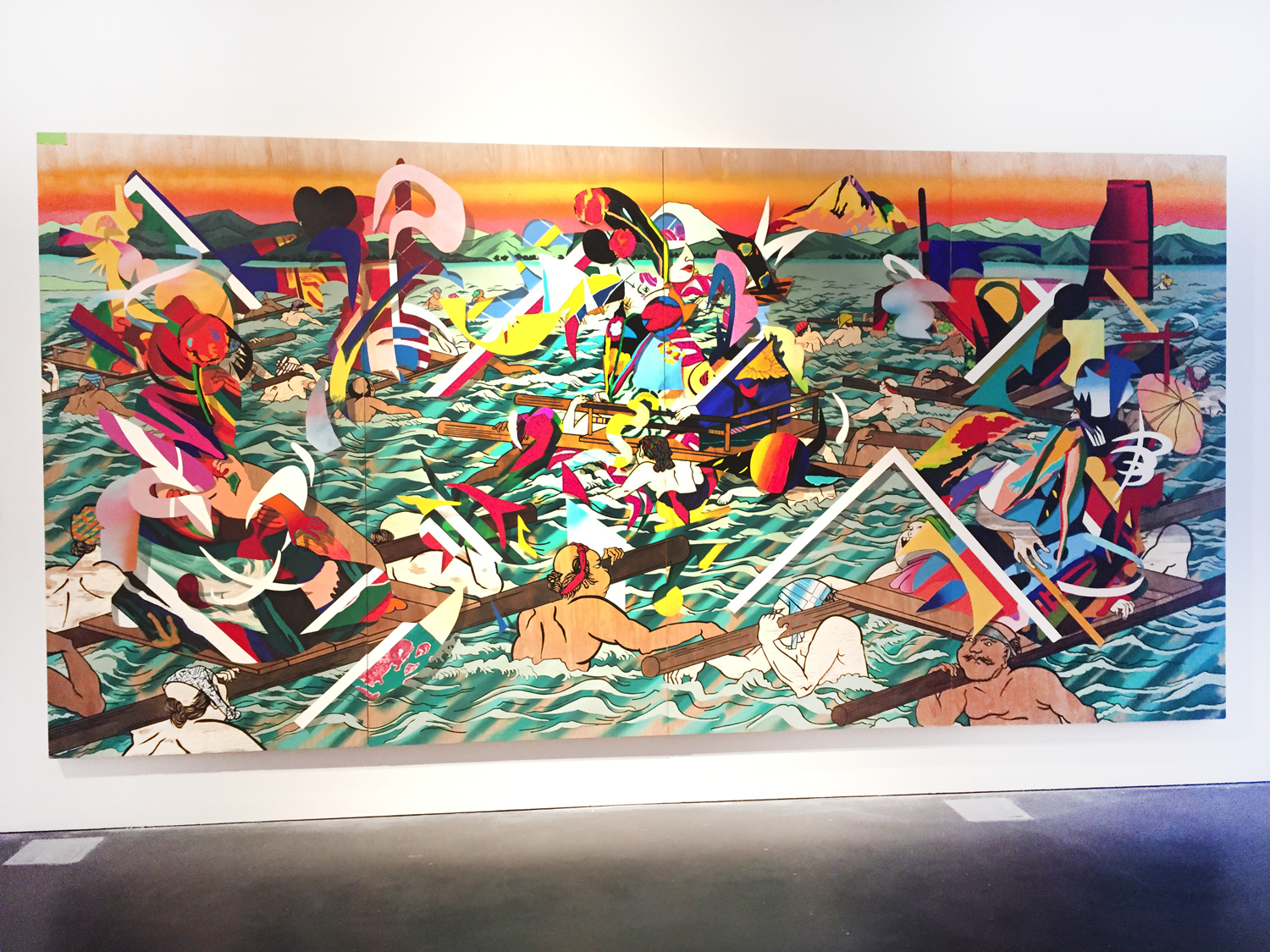 4 Rafts, the large painting on the north wall of the Merage Gallery, is based on a print, by Utagawa Hiroshige, that illustrates a crazy episode from Japanese history. The original print, titled Crossing the Oi River, depicts men ferrying a daimyo (feudal lord) and his entourage of beautiful women across the Oi River, which was the principal thoroughfare between Kyoto and Edo (present-day Tokyo) during the Edo period. The shogun, or cohort of military leaders, in Edo refused to build a bridge or allow ferries to operate across the river, for fear of invasion but demanded the regular attendance of their subordinate leaders at events in Edo. To reach Edo, passengers and goods had to be carried across the river on wooden platforms buoyed and steered by teams of men. 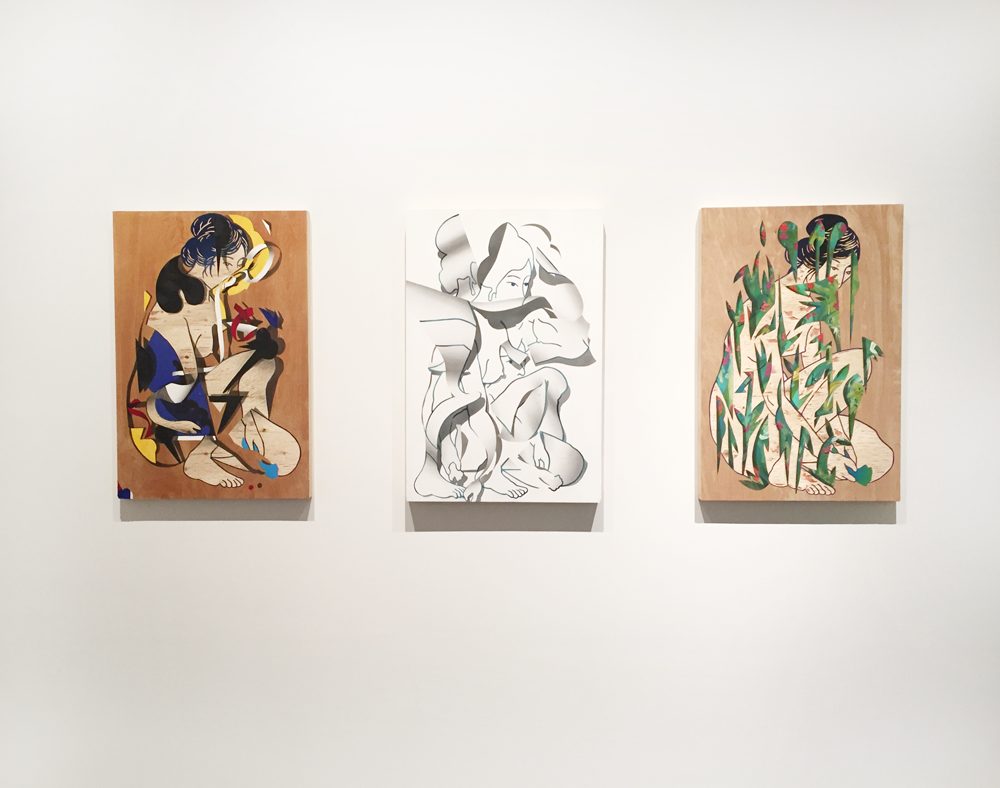 5 Rodriguez-Warner based the female figure that anchors his Bathing Gypsies series on the subject of Hashiguchi Goyo’s Woman Bathing. Trained in the yoga, or Western, style of painting, Goyo made paintings and prints like this one that combines Japanese and Western styles. The bathing nude woman became a popular subject among Japanese printmakers and French Impressionist painters in the late 19th and early 20th centuries.

Become a real insider and join Diego and me for a conversation in the cafe, Thursday, February 22. Get tickets here.