A Conversation with the Curators of Mixed Taste

Mixed Taste has been a celebrated program of MCA Denver since it was first conceived in 2004 by former Mark G. Falcone Director at MCA Denver, Adam Lerner. In 2017, Mixed Taste became a collaboration between MCA Denver and the Denver Center for the Performing Arts Off-Center, allowing even more people to see these wild and enlightening lectures for themselves.

Co-produced and co-hosted by Sarah Kate Baie, MCA Denver’s Director of Programming, and Charlie Miller, DCPA Off-Center Curator, have made this beloved program of mismatched topics like Julia Child & Nordic LARPing something fans anticipate the return of each year, bringing audiences together for an engaging and often hilarious event. We sent some questions off to Sarah and Charlie to learn more about Mixed Taste and what the magic sauce is that makes the program so special. 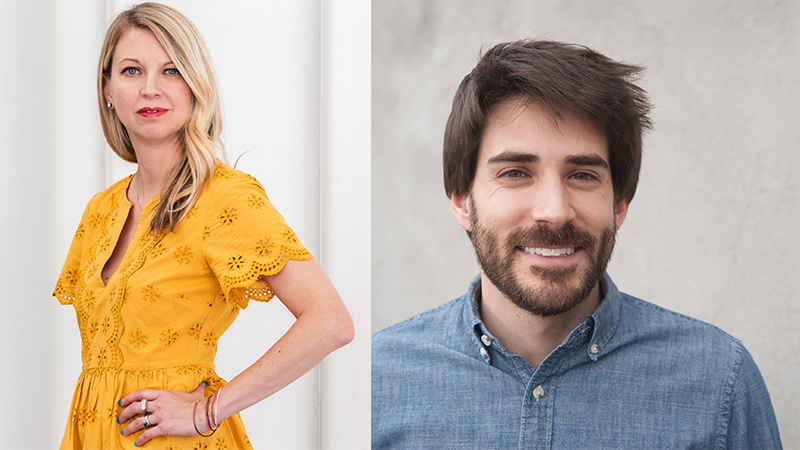 What is the origin story of Mixed Taste?

Sarah: Mixed Taste was conceived by Adam Lerner for The Laboratory of Art and Ideas at Belmar – a contemporary art space located in the suburbs of Lakewood. At the time, Belmar had lots of vacant storefronts and wanted to create some opportunities for people to visit the new mixed-use development. As the story goes, the marketing team for the shopping area invited Lerner to their brainstorming and proposed that they host evening events like "a Taste of Cheese" or "a Taste of Rioja," where experts would talk about food and wine. Lerner immediately rejected this idea and proposed "Mixed Taste" instead, where two speakers would be invited to present on two unrelated topics, and then there would be question and answer on both topics together – at the same time.

How and when did the collaboration between the Denver Center for the Performing Arts and MCA Denver come about?

Charlie: In 2016, Adam Lerner and Sarah Baie approached me with the idea. We had been talking about other potential collaborations between MCA Denver and DCPA Off-Center, and they were interested in DCPA joining as a producing partner so Mixed Taste could have a more reliable home (they had struggled with securing good venues over the years) and the opportunity to evolve and grow. As a longtime fan of the series, I was thrilled with the idea and the partnership began in 2017 with our first summer in the Seawell Ballroom.

What do you think is the magical ingredient that has made Mixed Taste a popular program in Denver?

Sarah: Mixed Taste is a lecture series where anything can happen. It's special because it's like weirdness and serendipity got set up on a blind date. Mixed Taste takes the joy of learning something new, and marries it to the thrill of finding an obscure connection. For example, Wittgenstein and Hula Dancing? Turns out they are basically the same thing. Existentialism and Soul Food? How can you even define existentialism without soul food? BigFoot and Carl Jung? I mean, where do I even start?

The best part of Mixed Taste is you don't have to know anything about the topics to have fun. Never heard of machine theology? No problem. Can't think of why monoliths matter? Don't sweat it. All you have to bring is yourself. If you love to learn new things, and you don't mind if things get weird, this is probably the program series for you.

Charlie: There are so many wonderful ingredients that make Mixed Taste great! Obviously, the foundation is having two great topics that both sound interesting (so you want to attend) and are interesting (so it’s not a waste of your time). Along with that is having compelling speakers who are passionate and knowledgeable about their topic. I suppose the most magical ingredient is the audience and the connections they make during the Q&A. A good connection can transform an evening from interesting and entertaining to transcendent and profound. And the concluding poem can also do just that.

I love that at the end of the program, the topics are brought together in freestyle form by a poet. Was this an element always incorporated into the program?

Sarah: In 2017, MCA Denver partnered with Off-Center at the Denver Center for Performing Arts and the series moved to its new home at the Sewell Ballroom. The addition of the poet is the innovation of Charlie Miller. This synthesis is truly the cherry on top.

This year, poet Suzi Q. Smith guest-curated Mixed Taste. Can you share what brought about this union?

Charlie: Last year, when we decided to produce a mini-series (Mixed Taste: Still At Home) to get us through the long COVID winter, Sarah and I thought it would be interesting to bring on a guest curator to help brainstorm new topics and connect us to great speakers. So we engaged longtime friend of Mixed Taste Adrian Miller, who was excited to collaborate and came up with a wonderful lineup. Working with Adrian was so much fun that we decided to bring on another guest curator to help plan this summer’s series. And so we turned to another longtime friend of the series, Suzi Q. Smith, who was our first Poet Laureate and host in 2017 and has been involved as a poet every year since. Suzi also gave a great talk on Artivism last summer. The results have again been awesome, so I think this guest curator model might be here to stay.

What have been your top three most memorable Mixed Taste lineups?

Charlie: Some of my favorite pairings since I have been involved in producing the series include: Drag Queen Activism & Air Traffic Control (2017), Crop Circles & Prenups (2018), Celery & Emo Rap (2019), Napping & Slovenian Zombies (2020)

Sarah: I have been producing Mixed Taste for a long time, and I was a Mixed Taste aficionado before that, so I have seen a lot of magical Mixed Tastes over the years. However, I will always hold space for the late, great Jake Adam York, who in many ways invented the form of Mixed Taste. Jake was a poet and a professor by trade, but he was also a lover of bourbon and barbeque. Whether he was speaking on the sazerac (America's first cocktail) or Shakespeare, he held the audience in the palm of his hand. He once defined grace through the recipe for a perfect mint julep, which is a definition I have returned to again and again.

If Sarah was to give a Mixed Taste talk, what do you think her subject would/should be? What or who would you pair with it?

Charlie: I would like to hear Sarah give a talk about her five (is that the current number!?) cats and how they all came to live in her house. I have heard bits and pieces of this talk and seen many of them make cameos on Zoom, but I have yet to understand the full story. I would definitely pair that with something high brow, perhaps a math or science topic, like Pythagorean's Theorem or CRISPR. CRISPR & Sarah Baie’s Cats.

If Charlie was to give a Mixed Taste talk, what do you think his subject would be? What would you pair with it?

Sarah: You wouldn't know it to look at him, but Charlie has a secret weakness for puns. If he was to host a Mixed Taste, it would be a twenty-minute pun fest.

What about co-hosting Mixed Taste together makes it fun?

Charlie: Sarah is a wonderful collaborator on so many levels. She has such a rich history with Mixed Taste that she instinctively knows what kinds of pairings work and what doesn’t work. She also has a wonderful sense of humor and comes up with the weirdest and best ideas for halftime games. During the show, she can facilitate a great Q&A (which is not easy), knowing which audience questions to select, when to speak up with the next question and when to leave space for the speakers to respond, and of course, jumping in with her own observations and witty remarks along the way.

Sarah: Charlie seems very serious, but he is always up for some crazy nonsense. His favorite game to play at halftime is “Mixed Taste, literally,” and somehow it always winds up with someone eating bugs. But beyond the wacky antics, Charlie is a super-smart guy who loves the audience and wants everyone to have a great time. What more could you ask for in a co-producer?

There are three performances left in the 2021 season of Mixed Taste so do not miss out on your opportunity to attend in person or watch online. Visit mcadenver.org/events to purchase your tickets today!

Black lives matter. We hear you and we see you and we stand with you. Read our full statement
WE'RE TURNING 25 THIS YEAR Check Out Our Plans