Located on the 1st Floor

Keith Haring: Grace House Mural features, for the first time since it was created, a site-specific painting that Haring executed in 1983/84 for those living at Grace House, a Catholic youth center in Manhattan. Recently excavated from its original site, the mural now exists as a series of 13 panels and additional ephemera including the original plaque, mailbox, and two doors that Haring integrated into his design, which collectively mark the details of its initial installation.

After experimenting with collage and automatic drawing, Keith Haring (b. 1958, Kutztown, PA, d. 1990) developed an immediate, direct, and unmediated approach to artmaking, which Grace House Mural vividly reflects. As with much of Haring’s painting, this project makes clear how the strength of his work lies in part in his bold and flexible use of line. A fluid, confident, jubilant application of paint on the wall pulsates with energy and vitality. If anything can be noted about Haring’s graphic style, it is that it is expansive, always seeming to extend beyond a frame, to stretch into our space, and to be in conversation and engaged with its viewer.

Androgynous bodies, dog-like animals, action, ENERGY, movement, dance, performance – all of these formed his developing alphabet of forms and ideas and are manifest in Grace House Mural. His creative approach unleashes ideas, forms, creative images, and language, from their original context or structure, and allows them to breathe on their own. The universality of his pictorial forms also enabled a more direct access to his ideas. He employed the simplest of means to communicate directly with the public, and to create work that was accessible to all viewers. Beginning with his early drawings made across subway stations in New York City and continuing through his large-scale public murals, at the heart of his creative efforts was a democratizing of his art and a commitment to sharing it as widely as possible. Much like these subway drawings, which were fragile, delicate, and performative, Grace House Mural intends to foster and facilitate a public engagement with art.

Grace House Mural was designed specifically to inspire and elevate the spirits of some of New York’s at-risk teens and includes some of his most iconic motifs: the ‘Radiant Baby’, ‘Barking Dog’, and dancing figures. This work is part of a select group of Haring murals–of the forty-five created during his lifetime, less than half remain today. 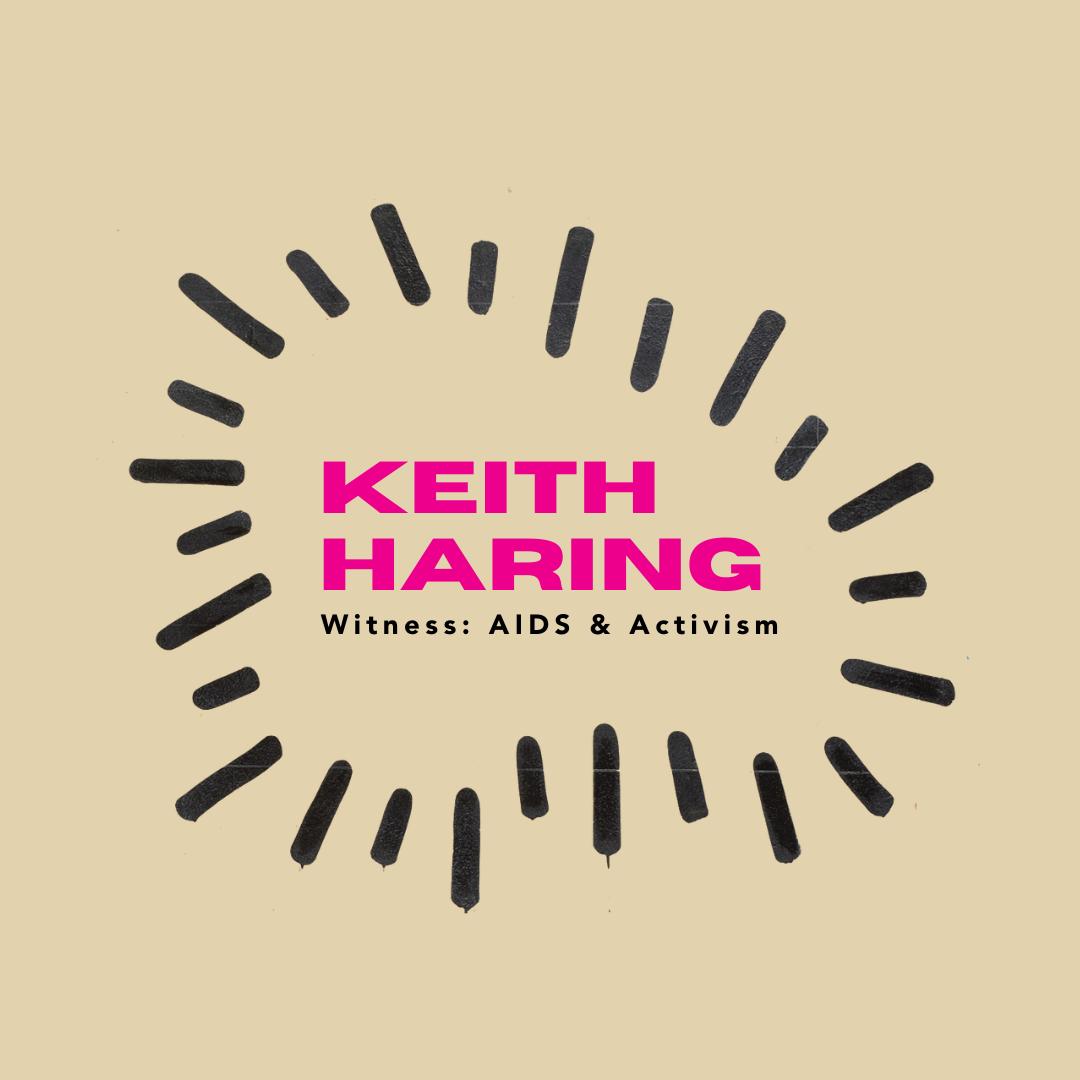 To celebrate our current exhibition, we invited local dancers to create a video in our galleries, inspired by the movement and dance styles of Haring's time.

Catch up on virtual events on-demand

Keith Haring: Stairwell to Grace begins in the stairwell of Grace House and moves through Haring’s art and life. Director of the Keith Haring Foundation Gil Vazquez introduces the life and work of Haring. Host Carlo McCormick shares the history of the staircase in art and film, from Marcel Duchamp to Led Zeppelin to Alfred Hitchcock.

Dance played a fundamental role in Keith Haring's life and art. The ecstatic experience of dance and the visual dynamics of bodies in motion constituted a formal language for Haring as he translated the energy of the streets and nightclubs into fine art.

What does it mean when an artist creates art to give away for free to the public? Keith Haring was part of a generation of artists who, inspired by the explosion of graffiti masterpieces on the subways, began to take their studio practices directly to the streets and gave birth to the contemporary street art movement.

Join us live for our final program on Keith Haring 4/21 at NOON MDT. Learn more and register today. 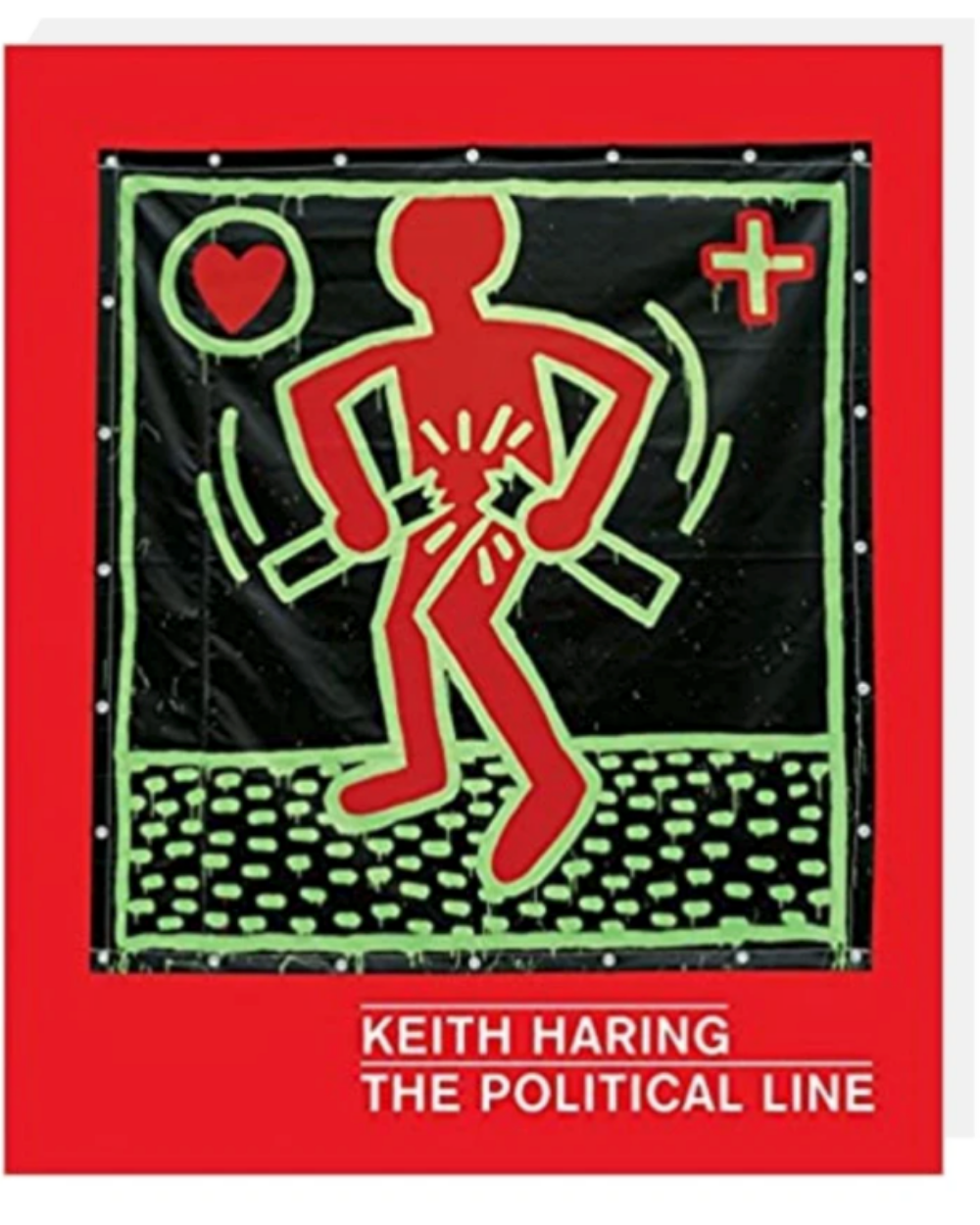 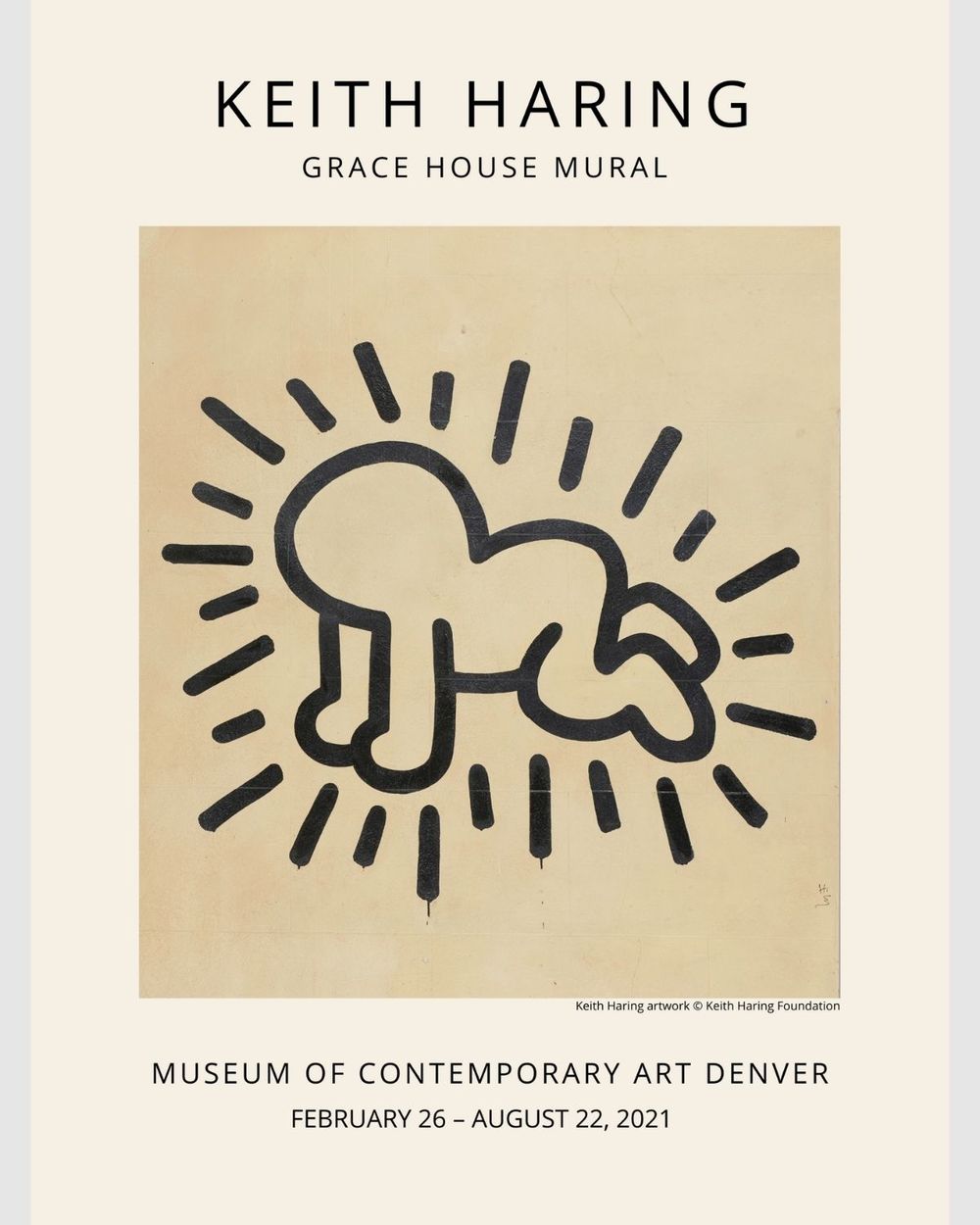 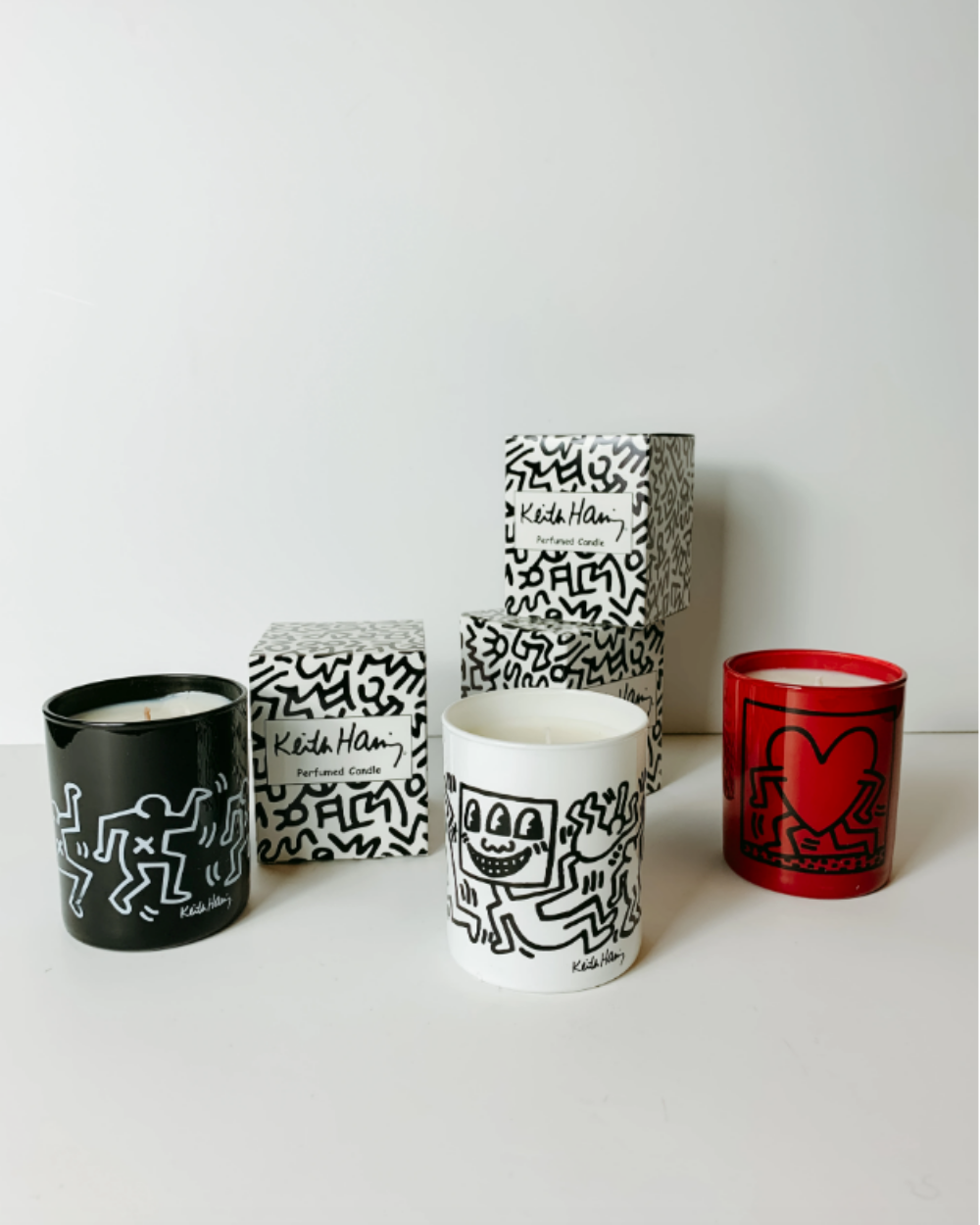 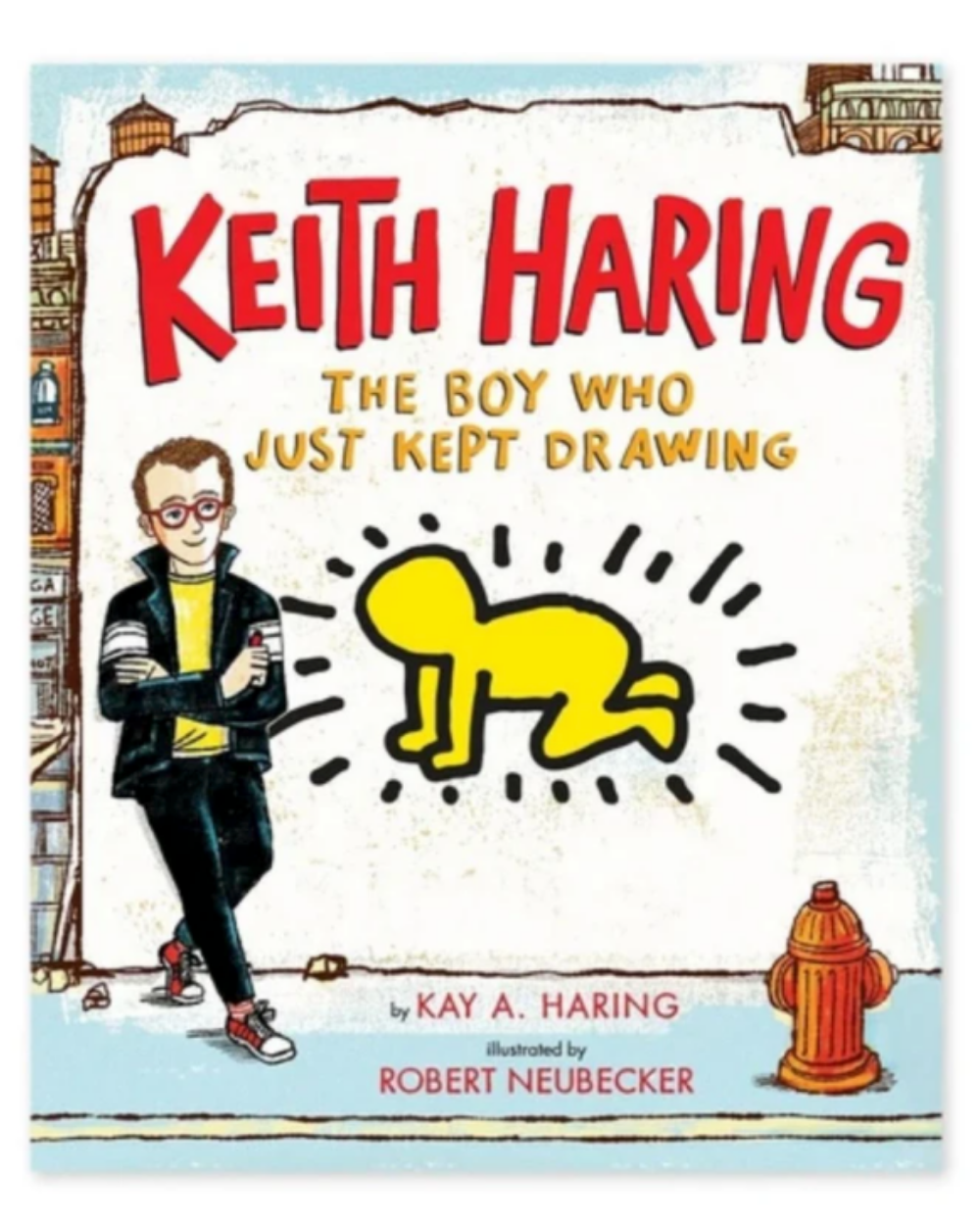 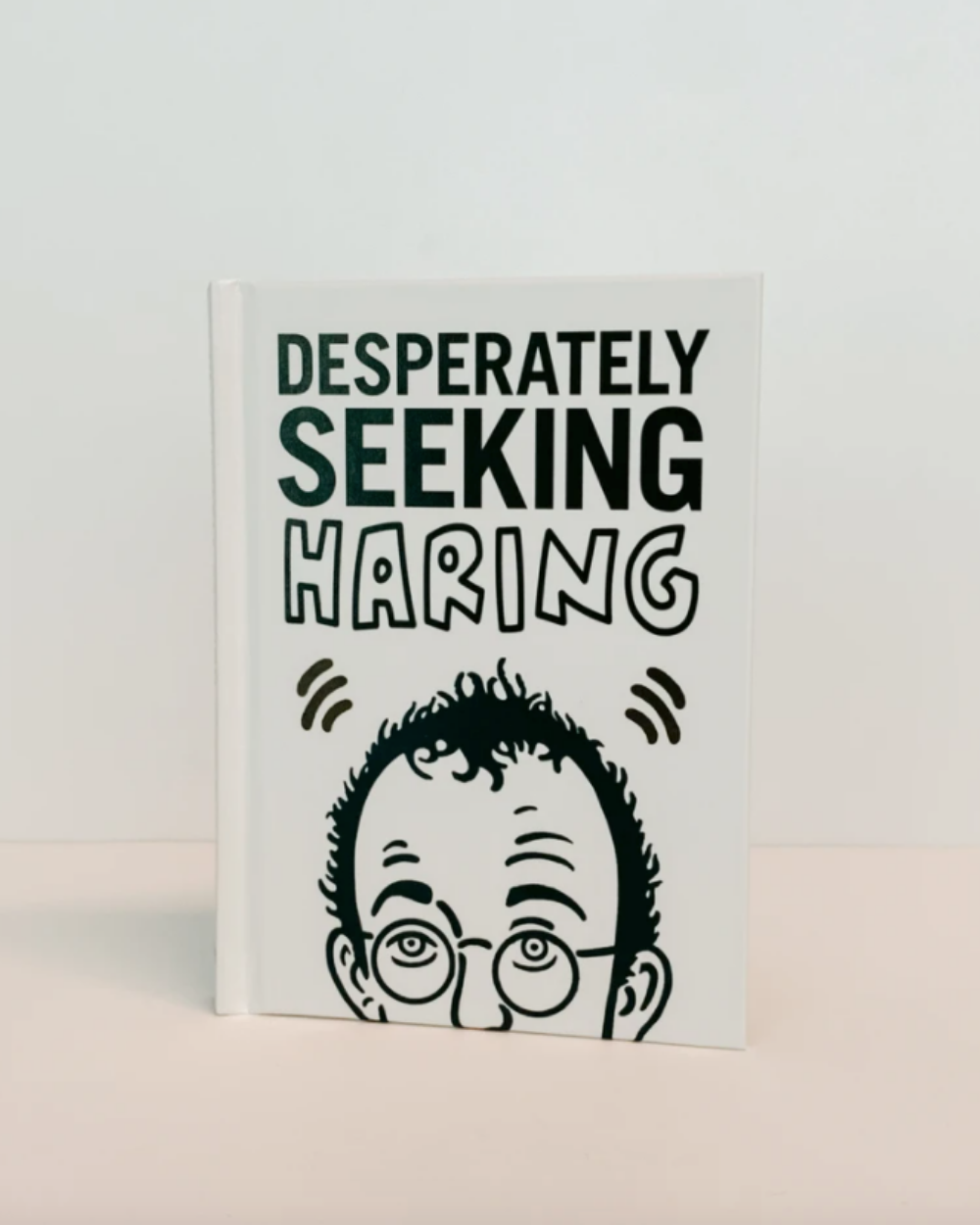 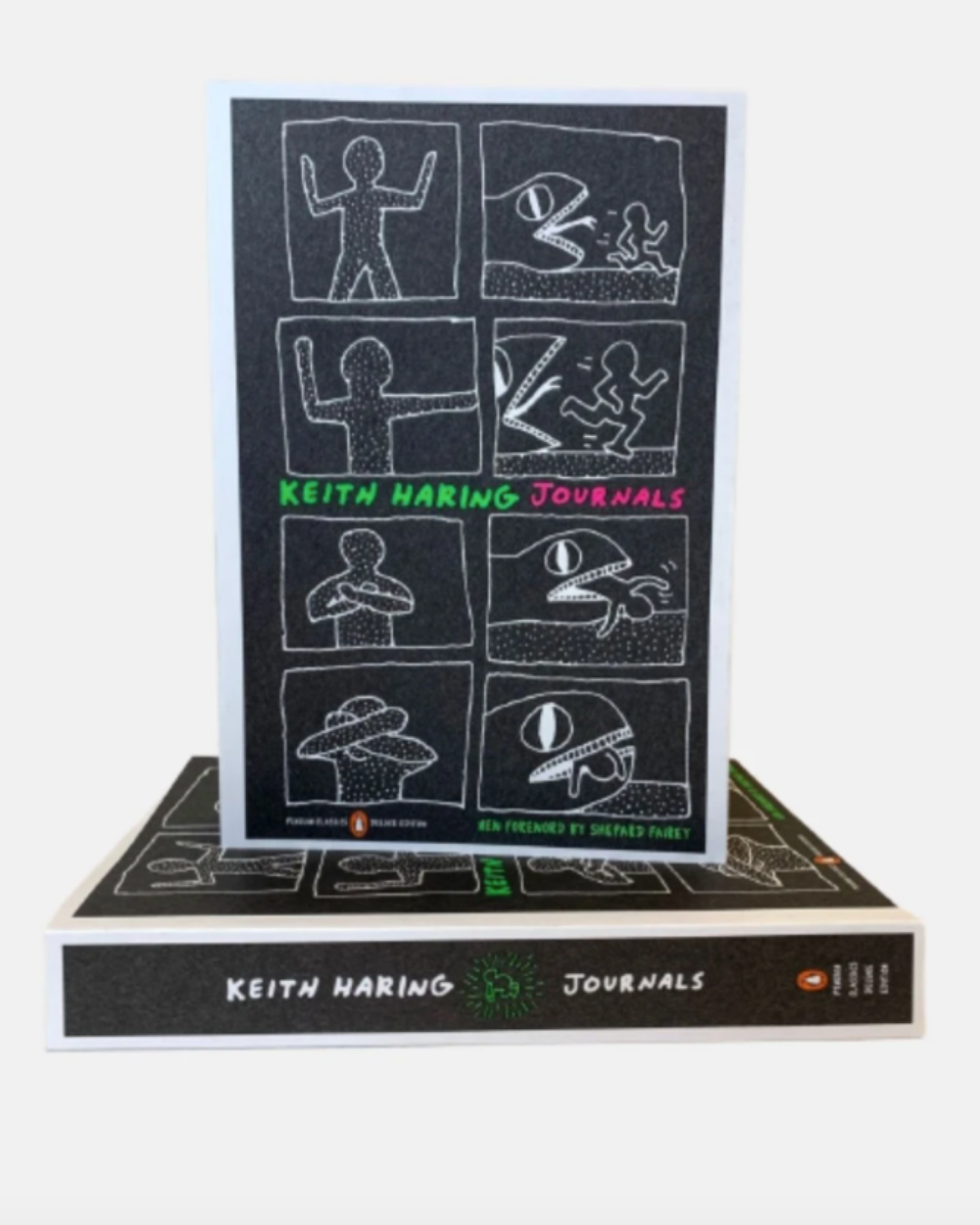 Listen up with Audio 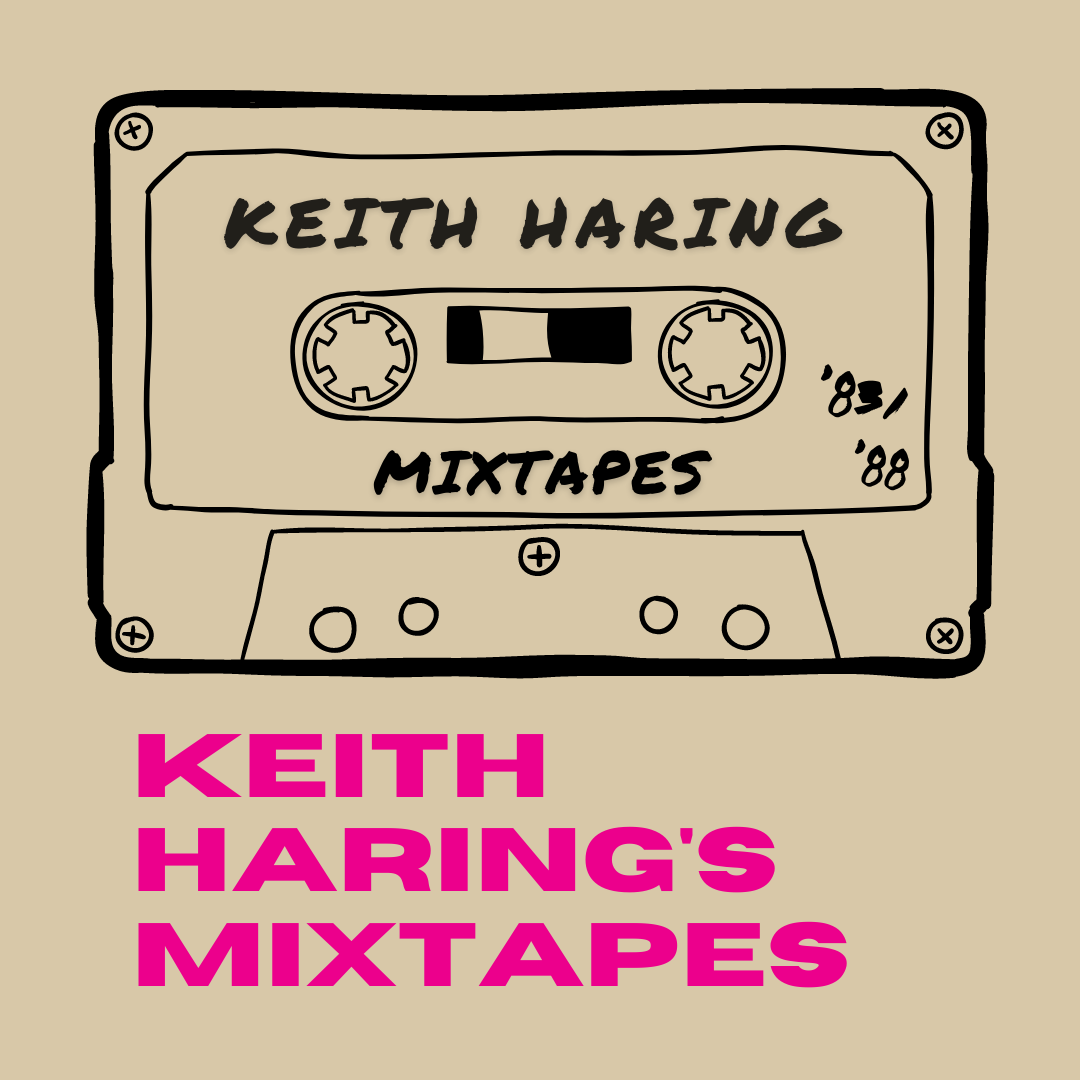 Within the archives of the Keith Haring Foundation are over 100 now digitized mixtapes of Keith Haring’s. The music is an homage to the vibrant and creative environment in which he existed and encapsulates a magical time in New York City history.

We are pumped to share a collection of this music with you in a playlist on Spotify.

Listen to the Playlist Here 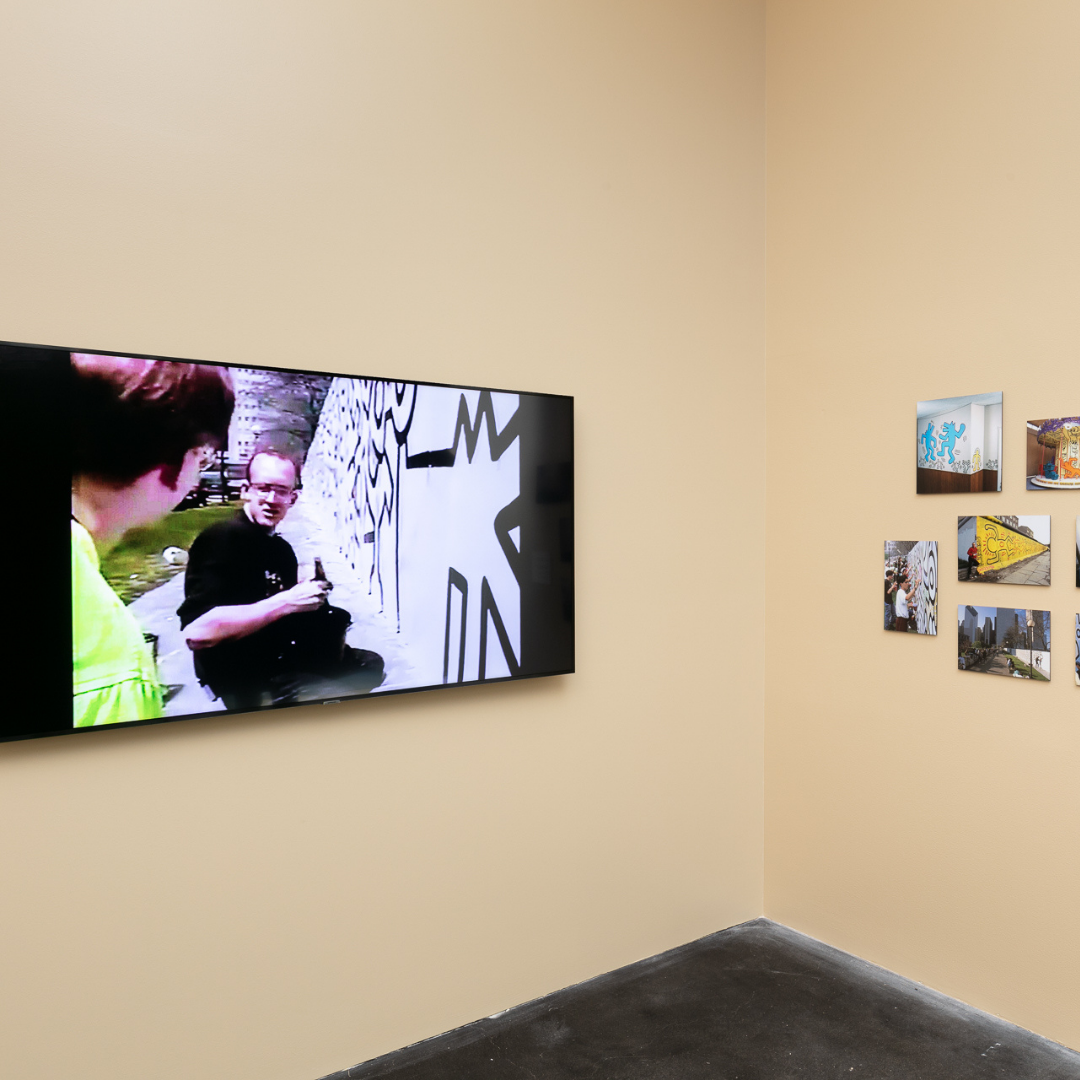 Keith Haring died of complications due to AIDS at the age of 31 on February 16, 1990. He spoke of his mortality shortly before his death and recognized what his creative project had achieved: “A more holistic and basic idea of wanting to incorporate [art] into every part of life, less as an egotistical exercise and more natural somehow. I don’t know how to exactly explain it. Taking it off the pedestal. I’m giving it back to the people, I guess.” In the following audio clip, exhibition curator Nora Burnett Abrams gives context to the AIDS epidemic and local actor Jake Mendes reads excerpts from a candid interview Haring did with Rolling Stone in which he shared his diagnosis. 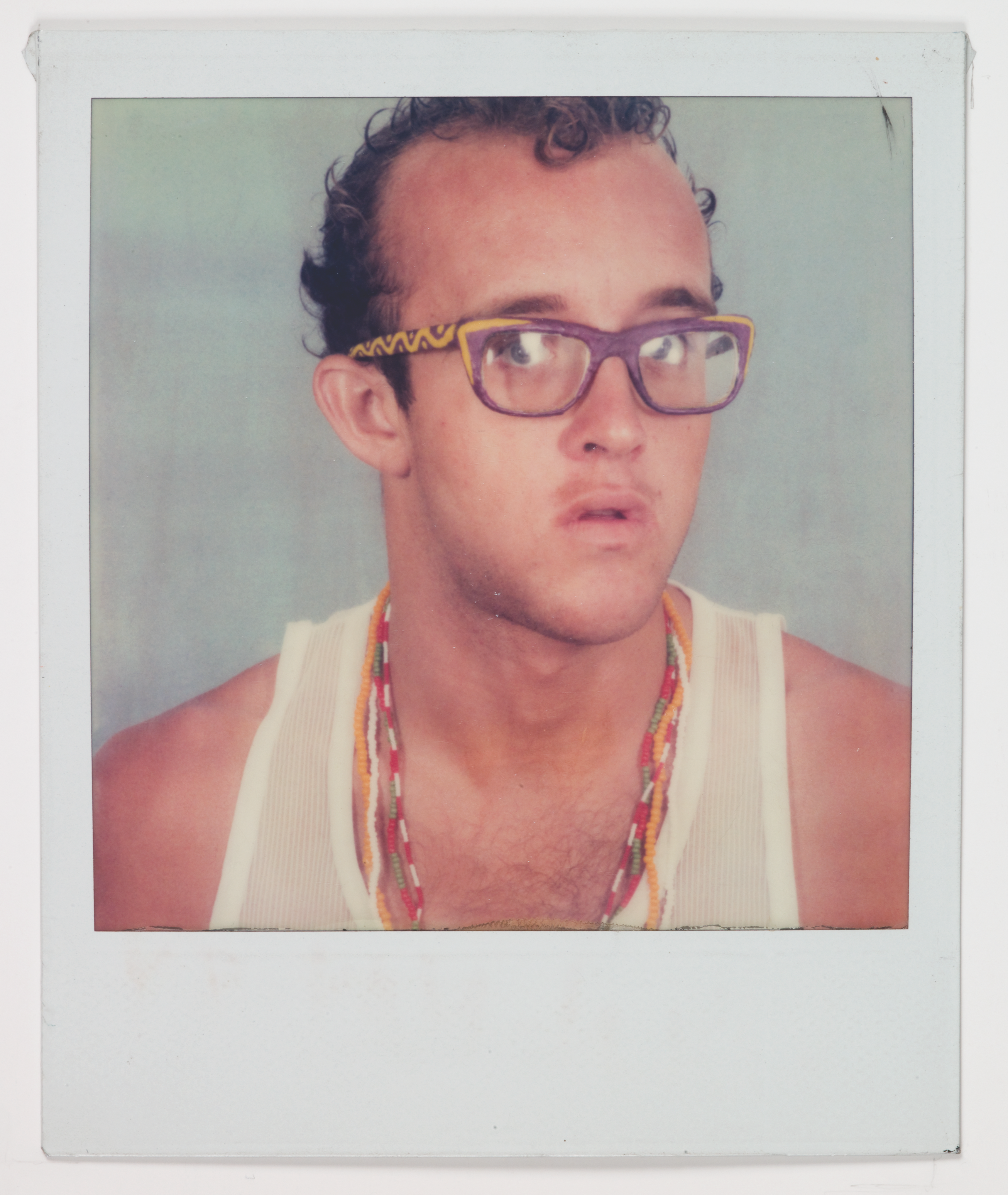 Keith Haring was born in 1958 in Reading, Pennsylvania, and was raised in nearby Kutztown, Pennsylvania. Upon graduation from high school in 1976, Haring enrolled in the Ivy School of Professional Art in Pittsburgh, a commercial arts school. He soon realized that he had little interest in becoming a commercial graphic artist and, after two semesters, dropped out. In 1978, Haring moved to New York City and enrolled in the School of Visual Arts (SVA). In New York, Haring found a thriving alternative art community that was developing outside the gallery and museum system, in the downtown streets, the subways and spaces in clubs and former dance halls.

Haring experimented with performance, video, installation and collage, while always maintaining a strong commitment to drawing. In 1980, he began to create drawings in white chalk upon blank paper panels throughout the subway system. Between 1980 and 1985, Haring produced hundreds of these public drawings in rapid rhythmic lines, sometimes creating as many as forty “subway drawings” in one day.

In April 1986, Haring opened the Pop Shop, a retail store in Soho selling T-shirts, toys, posters, buttons and magnets bearing his images. The shop was intended to allow people greater access to his work, which was now readily available on products at a low cost. The shop received criticism from many in the art world, however Haring remained committed to his desire to make his artwork available to as wide an audience as possible, and received strong support for his project from friends, fans and mentors including Andy Warhol.

Throughout his career, Haring devoted much of his time to public works, which often carried social messages. He produced more than 50 public artworks between 1982 and 1989, in dozens of cities around the world, many of which were created for charities, hospitals, children’s day care centers and orphanages. Haring also held drawing workshops for children in schools and museums in New York, Amsterdam, London, Tokyo and Bordeaux, and produced imagery for many literacy programs and other public service campaigns.

Haring was diagnosed with AIDS in 1988. In 1989, he established the Keith Haring Foundation, its mandate being to provide funding and imagery to AIDS organizations and children’s programs, and to expand the audience for Haring’s work through exhibitions, publications and the licensing of his images. Keith Haring died of AIDS related complications at the age of 31 on February 16, 1990.

During a brief but intense career that spanned the 1980s, Haring’s work was featured in over 100 solo and group exhibitions. He was highly sought after to participate in collaborative projects ,and worked with artists and performers as diverse as Madonna, Grace Jones, Bill T. Jones, William Burroughs, Timothy Leary, Jenny Holzer, Yoko Ono and Andy Warhol. Since his death, Haring has been the subject of several international retrospectives and his work can be seen today in the exhibitions and collections of major museums around the world.

Black lives matter. We hear you and we see you and we stand with you. Read our full statement
Join Us For Weekly Events Both Virtual & In-Person